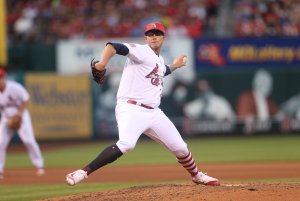 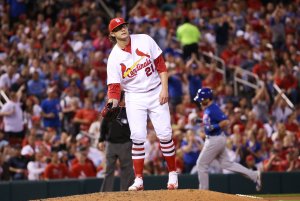 MLB // 4 years ago
Archer to make debut for Pirates vs. Cardinals
The Pittsburgh Pirates beat out other teams to land right-hander Chris Archer at the non-waiver trade deadline Tuesday, and now they will get to see him in action.

MLB // 4 years ago
Cards' O'Neill nails Royals' Goins at plate with six-bouncer
St. Louis Cardinals outfielder Tyler O'Neill managed to throw out a runner at the plate on a six-bounce toss during a loss to the Kansas City Royals.

MLB // 4 years ago
Jameson Taillon, relievers fuel Pittsburgh Pirates past St. Louis Cardinals
With his club nearly out of contention in the National League Central but still locked in a three-way wild-card race, St. Louis Cardinals manager Mike Matheny handed the ball to a rookie right-hander.

MLB // 5 years ago
Milwaukee Brewers: Jesus Aguilar's blast dooms St. Louis Cardinals
MILWAUKEE -- Jesus Aguilar homered for the second consecutive game and Matt Garza worked into the sixth inning for the Milwaukee Brewers, who won a series for just the second time since the All-Star break with a 2-1 victory over the St. Louis Cardinals on Thursday afternoon at Miller Park.

Brett Aarion Cecil (born July 2, 1986 in Dunkirk, Maryland) is a pitcher for the Toronto Blue Jays of Major League Baseball. Cecil was drafted as the 38th overall pick in the 2007 Major League Baseball Draft by the Blue Jays. He pitched for DeMatha Catholic High School and the University of Maryland, College Park.

He first pitched in a professional league for the Class A Auburn Doubledays in 2007. In 2008, he had been promoted to the Dunedin Blue Jays, and later to the Double-A New Hampshire Fisher Cats, and finally to the Triple-A Syracuse Chiefs. He received an invitation to attend spring training with the Blue Jays in 2009, but began the season in Triple-A.

Although he pitches left-handed, he is actually right-handed; pitching is "the only thing he does left-handed".

FULL ARTICLE AT WIKIPEDIA.ORG
This article is licensed under the GNU Free Documentation License.
It uses material from the Wikipedia article "Brett Cecil."