U.S. News // 4 weeks ago
Scorching heat wave to intensify across U.S. Southwest
A brutal heat wave that has been baking the southwestern United States this week is forecast to ramp up in intensity in the coming days, causing many sweltering locations to experience warmth well above normal.

U.S. News // 2 months ago
'Dome of Heat' to threaten many record highs across western U.S. next week
After an unsettled and much cooler week for many in the West, the heat will be cranked back up to end the month of May.

U.S. News // 3 months ago
Arctic blast set to punish Northeast with cold, May snow
An unusually chilly spring is about to turn even more shocking as cold air, moisture and a visit from the polar vortex team up to trigger way out-of-season conditions for mid-May across portions of the Northeast. 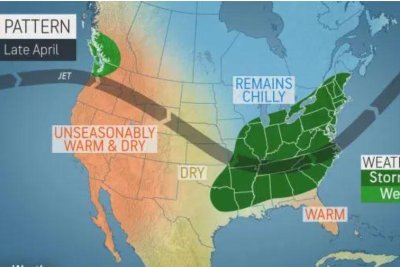 U.S. News // 3 months ago
Winter to strike back at northeastern U.S. with another dose of snow
Old Man Winter will take yet another parting swipe at the northeastern United States, meteorologists say, with more accumulating snow forecast for some of the higher elevations.

U.S. News // 3 months ago
Winter to strike back at northeastern U.S. with another dose of snow
Old Man Winter will take yet another parting swipe at the northeastern United States, meteorologists say, with more accumulating snow forecast for some of the higher elevations.

U.S. News // 4 months ago
Bomb cyclone to bring blast of winter back to parts of Northeast
Just as people in the Midwest and East become accustomed to April and even May-like warmth, winter will return to send a shock to these regions before Easter weekend begins.

U.S. News // 4 months ago
Meteorologists keep eye on Atlantic Ocean storm churning off East Coast
A massive storm is churning and has stalled over the western Atlantic Ocean, just offshore of the East Coast -- and it may acquire some tropical characteristics as it blasts New England this week.

U.S. News // 4 months ago
Storms poised to pummel Lone Star State prior to week's end
Thunderstorms will threaten to bring severe weather as well as needed rainfall to portions of central and southern Texas before the end of the week.

U.S. News // 4 months ago
Early spring snow to blanket Colorado, Wyoming
The same storm poised to unleash severe weather over the Mississippi Valley late this week will have a cold side and unload snow over portions of the central Rockies and adjacent High Plains.

U.S. News // 4 months ago
Eastern U.S. to see brief hot spell as spring begins
A surge of very warm air is poised to make a run along the Eastern Seaboard and Appalachians just in time for the official start of spring -- and some areas may challenge records.

U.S. News // 4 months ago
Above-average February temperatures topple over 1,000 records in U.S.
After delivering waves of springlike temperatures across the globe and even toppling a few daily highs, February 2020 ranked globally as the second warmest on record, which date back to 1880.

U.S. News // 5 months ago
Final week of February to bring chances for snowfall across nation
As February enters its final week, AccuWeather forecasters are eyeing two storms -- one weakening, the other strengthening -- that have the potential to dump snow on areas from the central Plains and middle Mississippi Valley to the Great Lakes region and the interior Northeast.

U.S. News // 5 months ago
Final week of February to bring multiple chances for snow across U.S.
As February enters its final week, AccuWeather forecasters are eyeing two storms that have the potential to dump snow on areas from the central Plains and middle Mississippi Valley to the Great Lakes region.

World News // 5 months ago
Army deployed to help combat deadly Storm Dennis in Britain
The British army has been deployed to help with flood relief for a powerful bomb cyclone that has killed two people and threatens a host of extreme weather elements including blizzard conditions and powerful winds across Iceland and Britain through the weekend.

Brett Lewis Anderson (born 29 September 1967) is an English singer-songwriter, best known as the lead vocalist of the band Suede. After Suede disbanded in 2003, he briefly fronted The Tears and released three solo albums. Suede reformed in 2010. In Suede's early days, Anderson's androgynous style and unique vocal style were an instant phenomenon in the UK.

Born in Haywards Heath, West Sussex into a working class family, Anderson's mother was an artist and his father was a classical music fan. He was brought up in a small council estate in Lindfield, a village adjoining Haywards Heath, attending Lindfield Junior School then Oathall Comprehensive School.

In his teens, Anderson played guitar for garage bands such as The Pigs and Geoff, the latter featuring future Suede bassist Mat Osman. In the late-1980s, Anderson and Osman formed Suede with Anderson's girlfriend, Justine Frischmann, soon recruiting guitarist Bernard Butler through an advertisement in the NME. After receiving percussional help from former Smiths drummer Mike Joyce, in 1991, Simon Gilbert joined Suede as their official drummer. It was around this time that Frischmann left Anderson for Blur frontman Damon Albarn, which created an early rift in the burgeoning Britpop scene of the early 1990s. After missing too many rehearsals and flaunting her relationship with Albarn while still living with Anderson, Frischmann was fired from the group, going on to front Elastica.

FULL ARTICLE AT WIKIPEDIA.ORG
This article is licensed under the GNU Free Documentation License.
It uses material from the Wikipedia article "Brett Anderson."
Back to Article
/