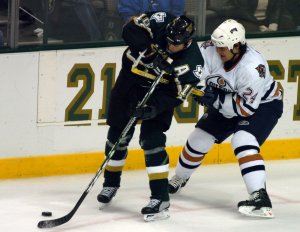 I thought I had a chance for six or seven tonight

Brenden Morrow (born January 16, 1979) is a Canadian professional ice hockey left winger and captain of the Dallas Stars of the National Hockey League (NHL). Morrow played junior hockey in the Western Hockey League (WHL) for the Portland Winter Hawks. During his junior career, he helped Portland win the Memorial Cup during the 1997–98 season. He was drafted by the Dallas Stars in the first round (25th overall) of the 1997 NHL Entry Draft.

Morrow has represented Canada internationally at a number of different events. He won a silver medal at the 1999 World Junior Championships. He has represented Canada at the Ice Hockey World Championships four times, winning a gold medal in 2004 and a silver medal in 2005. He also played for Canada at the 2004 World Cup of Hockey, which Canada won. Morrow was named to Canada's team for the 2010 Winter Olympics, where he scored 2 goals and added an assist in the tournament as Canada won the gold medal.

Morrow played minor hockey in his hometown of Carlyle, Saskatchewan and in the nearby community of Estevan. Despite putting up impressive numbers in his final year of bantam hockey (117 goals, 72 assists in 60 games), Morrow was not selected in the WHL Bantam Draft, and instead walked-on with the Portland Winter Hawks.

FULL ARTICLE AT WIKIPEDIA.ORG
This article is licensed under the GNU Free Documentation License.
It uses material from the Wikipedia article "Brenden Morrow."
Back to Article
/