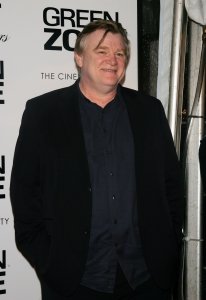 Entertainment News // 3 months ago
What to stream this weekend: 'Misbehavior,' 'Father of the Bride' reunion
Keira Knightley protests the 1970 Miss World pageant in "Misbehaviour" and "The Great British Baking Show" Season 11 cooks up fresh delights this weekend in streaming entertainment.

TV // 3 months ago
Jeff Daniels gets 'apolitical' in James Comey role
Jeff Daniels plays former FBI Director James Comey in "The Comey Rule." He discusses how he embodied the real-life character in the Showtime miniseries, which is running Sunday and Monday on Showtime.

TV // 7 months ago
Jeff Daniels is James Comey in first look at Showtime miniseries
"The Comey Rule," starring Jeff Daniels as James Comey and Brendan Gleeson as President Donald Trump, will premiere on Showtime in November.

Movies // 11 months ago
'In Bruges' trio reuniting for new film in Ireland
Filmmaker and playwright Martin McDonagh is reuniting with his "In Bruges" stars Colin Farrell and Brendan Gleeson for a new movie.

Brendan Gleeson (born 29 March 1955) is an Irish actor. His best-known films include Braveheart, Gangs of New York, In Bruges, 28 Days Later, the Harry Potter films, and the role of Michael Collins in The Treaty. He won an Emmy award in 2009 for his portrayal of Winston Churchill in the film Into the Storm.

Gleeson was born in Dublin, Ireland, and is the half brother of Brendan Mahon, Son of Maurice and Phylis Mahon. Brendan Gleeson has described himself as having been an avid reader as a child. After leaving school for a short while, he worked for two years in an office with a health board. He then graduated from University College Dublin and went on to drama school in London at the Royal Academy of Dramatic Art (RADA). After completing the 3 Year Acting Drama Course at RADA, Gleeson worked at the Royal National Theatre, Shakespeare's Globe Theatre, and the Royal Shakespeare Company in Stratford-upon-Avon. He performed in such works of William Shakespeare as King Lear, Richard III, and Hamlet. Gleeson was also known for performing the works of Anton Chekhov in London's West End. He returned to Ireland and worked for several years as a secondary school teacher at the now defunct Belcamp College in Malahide, County Dublin, which closed in 2004. He taught the Irish language (Gaeilge), English and Physical Education. During that time Gleeson was also active in the Dublin Shakespeare Festival.

Gleeson started his film career at the age of 34. He first came to prominence in Ireland for his role as Michael Collins in The Treaty, a television film broadcast on RTÉ One, and for which he won a Jacob's Award in 1992. He has acted in such films as Braveheart, I Went Down, Michael Collins, Gangs of New York, Cold Mountain, 28 Days Later, Troy, Kingdom of Heaven, Lake Placid, Artificial Intelligence: AI and The Village. He won critical acclaim for his performance as Irish gangster Martin Cahill in John Boorman's 1998 film The General.

FULL ARTICLE AT WIKIPEDIA.ORG
This article is licensed under the GNU Free Documentation License.
It uses material from the Wikipedia article "Brendan Gleeson."
Back to Article
/