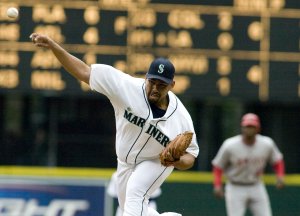 Richard Brandon Wood (born March 2, 1985) is an American professional baseball infielder with the Pittsburgh Pirates of Major League Baseball. He bats and throws right-handed and was born in Austin, Texas.

Wood was drafted by the Angels in the first round (23rd overall) of the 2003 amateur draft.

He spent most of the 2005 season with the Angels' High-A Rancho Cucamonga Quakes, hitting .321 with a California League record 43 home runs and 51 doubles. Combined with two doubles and a triple in four games with the Triple-A Salt Lake Stingers, Wood became the first known minor leaguer to hit more than 100 extra-base hits in one year.

FULL ARTICLE AT WIKIPEDIA.ORG
This article is licensed under the GNU Free Documentation License.
It uses material from the Wikipedia article "Brandon Wood."
Back to Article
/