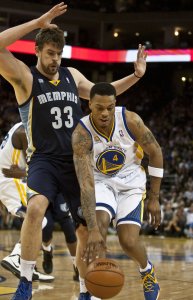 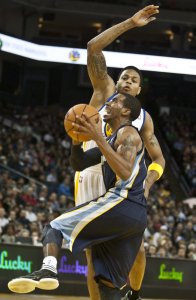 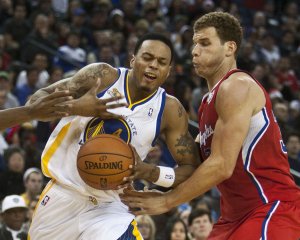 NBA // 4 years ago
NBA roundup: recap, scores, notes for every game played on January 11
MINNEAPOLIS -- Andrew Wiggins scored 28 points and Karl-Anthony Towns posted his ninth straight double-double with 23 points and 18 rebounds as the Minnesota Timberwolves held on to beat the Houston Rockets 119-105 on Wednesday night.

College Basketball // 4 years ago
No. 3 Kansas pulls away from Texas Tech
LAWRENCE, Kan. -- There was no last-second controversy this time for Kansas.

Brandon Leray Rush (born July 7, 1985) is an American basketball player. On July 15, 2008, Rush signed a contract to play basketball for the Indiana Pacers. He was drafted in 2008 by the NBA's Portland Trail Blazers. Rush played for the University of Kansas in college for three seasons, including the 2007–2008 national championship team. Rush was selected as a Wooden Award All-American in 2007 and again in 2008 while a player for the Kansas Jayhawks. He is brothers with former UCLA guard JaRon Rush and former Missouri guard Kareem Rush.

Rush played high school basketball at Westport High School in Missouri and Mt. Zion Christian Academy in Durham, North Carolina. After withdrawing from the 2005 NBA Draft, Rush committed to play basketball for coach Bill Self at the University of Kansas. He started at the small forward position in each game that season. Rush led the Jayhawks in scoring (13.5 points per game), rebounding (5.9) and three point shooting percentage (47.2%). He was instrumental in the team's Big 12 Conference championship run and was elected the conference Freshman of the Year. Also, Rush is the first freshman ever to be named to the First Team All-Big 12 (Kevin Durant later did this the next year for the Texas Longhorns). He is also the younger brother of former NBA player Kareem Rush and former UCLA Bruins player JaRon Rush. He was selected as the preseason Co-Player of the Year in the Big 12, along with fellow Jayhawk Julian Wright. Rush was also selected as a preseason All-American. in 2007, he earned a position on the All-Tournament Team in the Big 12 Tournament. On April 26, 2007, Rush announced his intentions to enter the 2007 NBA Draft, but he did not sign with an agent.

Rush returned to Kansas in May 2007, and it was announced that Rush had torn the anterior cruciate ligament in his right knee playing in a pickup game of basketball. He had planned on entering the 2007 NBA Draft had he not suffered this injury, but returned to play for Kansas. On June 1, 2007, Rush successfully had surgery on the torn ACL in his right leg. After rehabilitation, Rush returned to play in November and soon after re-entered the starting lineup.

FULL ARTICLE AT WIKIPEDIA.ORG
This article is licensed under the GNU Free Documentation License.
It uses material from the Wikipedia article "Brandon Rush."
Back to Article
/