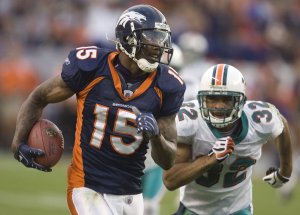 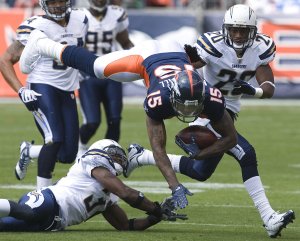 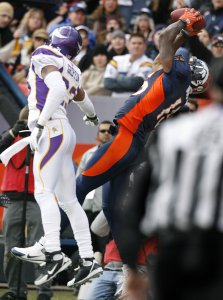 NFL // 1 year ago
Fantasy Football Who's In, Who's Out: Week 14 NFL injury report
When the Chicago Bears play the Los Angeles Rams in chilly Soldier Field Sunday night, they will apparently do so with Mitchell Trubisky back under center.

NFL // 1 year ago
Fantasy Football Who's In, Who's Out: Week 13 NFL injury report
Despite being listed as doubtful for Sunday, Baltimore Ravens head coach John Harbaugh left open the possibility that quarterback Joe Flacco could be available.

NFL // 1 year ago
Broncos lose another tight end as Jeff Heuerman lost for year
Denver's celebration of a big win Sunday was dampened a bit Monday with the announcement that tight end Jeff Heuerman is done for the season.

We woke up early in the morning to go jet skiing

Was this a lottery ticket that was going to be lost

Brandon Marshall (born March 23, 1984), nicknamed "The Beast," is an American football wide receiver for the Miami Dolphins of the National Football League. He was selected by the Denver Broncos out of the University of Central Florida, with the 119th overall pick in the fourth round of the 2006 NFL Draft.

Marshall is known for his ability to break and dodge tackles. He led all NFL wide receivers in yards after first contact for the 2007 NFL season. Regarding Marshall's breakaway ability, Kansas City Chiefs cornerback Brandon Flowers said, "Brandon Marshall is a defensive lineman playing wide receiver. He wants to inflict punishment on you. He wants you to try to tackle him so he can shove you off of him and get more yards." Oakland Raiders cornerback Nnamdi Asomugha said Marshall is "the toughest guy to bring down, one-on-one."

On December 13, 2009, Marshall set an NFL record for receptions in a game with 21. He is also one of only five players in NFL history to catch at least 100 passes in three consecutive seasons.

FULL ARTICLE AT WIKIPEDIA.ORG
This article is licensed under the GNU Free Documentation License.
It uses material from the Wikipedia article "Brandon Marshall."
Back to Article
/