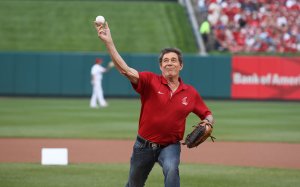 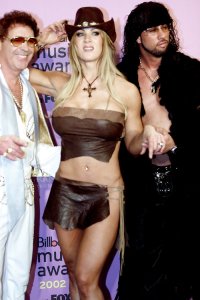 TV // 3 years ago
'The Voice' coaches sing a mashup of their hits with Jimmy Fallon
"The Voice" coaches Blake Shelton, Adam Levine, Kelly Clarkson and Jennifer Hudson appeared on "The Tonight Show" to perform a medley of their biggest songs.

TV // 3 years ago
HGTV reunites 'Brady Bunch' stars at sitcom house
HGTV posted on Twitter a new photo of the stars of "The Brady Bunch" standing in front of their former sitcom home in Studio City, Calif.

I was asked to do celebrity boxing, and I was able to dodge that bullet. I said no to celebrity bull riding. But when 'Circus' came up, there was no hesitation

I have been in television for over 50 years and I have to say in all honesty this is one of the best produced shows I've ever been on. I truly mean that. The best crew, the best hair, makeup, costumes. Even the judges are the best. (Hosts) Brooke (Burke,) Tom Bergeron, the music -- most of all this darling man, (my partner) Corky Ballas

The Brady Bunch is an American television sitcom starring Robert Reed, Florence Henderson, and Ann B. Davis, which revolves around a large blended family. The show originally aired from September 26, 1969, to March 8, 1974, on ABC and was subsequently syndicated internationally.

In 1965, following the success of his TV series Gilligan's Island, Sherwood Schwartz conceived the idea for The Brady Bunch after reading in the Los Angeles Times that "40% of marriages had a child or children from a previous marriage." He set to work on a pilot script called Mine and Yours and passed it around the "big three" television networks of the era. ABC, CBS and NBC all liked the script but each network wanted changes before they would commit to filming and Schwartz shelved the project.

Despite the similarities between the series and the 1968 theatrical release Yours, Mine and Ours starring Henry Fonda and Lucille Ball, the original script for The Brady Bunch predated the script for the film. However, the success of the film was a factor in ABC's decision to order episodes for the series.

FULL ARTICLE AT WIKIPEDIA.ORG
This article is licensed under the GNU Free Documentation License.
It uses material from the Wikipedia article "Brady Bunch."