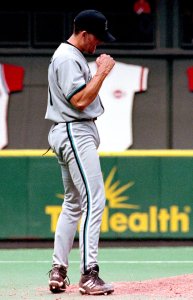 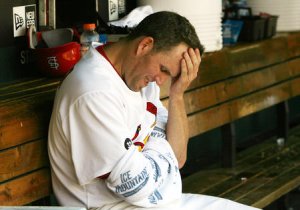 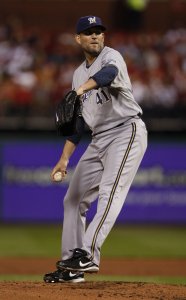 Braden LaVerne Looper (born on October 28, 1974, in Weatherford, Oklahoma) is a starting pitcher in Major League Baseball for the Milwaukee Brewers.

Looper was a scholar athlete while a student at Mangum High School in Mangum, Oklahoma. He graduated in 1993 with four letters each in baseball and basketball, and two in football, while also a member of the National Honor Society.

He focused on baseball while attending Wichita State University, and was inducted into their sports Hall of Fame in 2003. In 1996, he competed in the College World Series, and was a first-team All-American as a junior. He was also a member of the bronze medal-winning Team USA in the 1996 Olympics in Atlanta.

FULL ARTICLE AT WIKIPEDIA.ORG
This article is licensed under the GNU Free Documentation License.
It uses material from the Wikipedia article "Braden Looper."
Back to Article
/