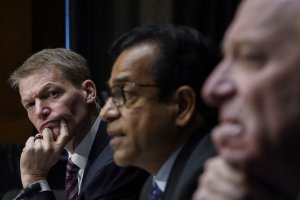 U.S. News // 1 year ago
Executives testify SolarWinds hack was of unprecedented scale, scope
Executives from major technology companies affected by the widespread SolarWinds hack testified before the Senate on Tuesday that the breach was of a scale and scope not seen in other major cyberattacks.

U.S. News // 1 year ago
Treasury 'suffered serious breach' in Russian cyberattack, says senator
State-sponsored hackers, believed to be Russian, broke into the emails of the Treasury Department's most senior staff in a cyberattack the damage from which is still unknown, the top Democratic senator said.

U.S. News // 1 year ago
Energy Dept., nuclear weapons agency breached in 'remarkable' cyberattack
The number of victims in an ongoing cyberattack continues to climb after the Department of Energy and the agency that oversees the nation's nuclear stockpile confirmed they were targeted.

U.S. News // 2 years ago
Microsoft aims to be 'carbon negative,' remove all its emissions since 1975
Microsoft has announced it will be fully "carbon negative" by the start of the next decade, as part of a project to remove more carbon dioxide from the atmosphere than it emits.

These are things that we invest substantial resources in, but not from the perspective of selling to make money

There are inconsistencies in the laws between states and even at the federal level. That, fundamentally, is not going to help us improve the state of privacy in the country

Bradley "Brad" Alexander Smith (born December 12, 1983) is an American football player (see the infobox to the right for positions) for the New York Jets of the National Football League. He was drafted in the 4th round of the 2006 NFL Draft. He played college football at Missouri.

Smith is the son of Phillip and Sherri Smith. He attended Chaney High School in Youngstown, Ohio. He was a two-time all-state selection for football and twice was selected as the All-City Offensive Player of the Year. He threw for over 2,700 yards in his career and 34 TDs. He also rushed for over 1,200 yards and 19 TDs. Brad also played basketball and was an all-city selection. He was given the nickname "Ninja Fists" for his quick release of the ball.

After being redshirted in 2001 he became the four-year starter (never missing a start) for the Missouri Tigers. His redshirt freshman year he established himself as one of the elite quarterbacks in college football becoming only the second player in Division 1-A football history to ever pass for 2,000 yards and rush for 1,000. He received numerous national and Big 12 Conference freshman honors, leading the Tigers to a 5-7 record. His sophomore year he led Mizzou to an 8-5 record and their first bowl game since 1998. In 2004 the Tigers went a disappointing 5-6 after beginning the season ranked number 17 by the Associated Press. His senior year he led the Tigers to a 7-5 record and his second Independence Bowl in three years and the first Mizzou bowl victory in 7 years.

FULL ARTICLE AT WIKIPEDIA.ORG
This article is licensed under the GNU Free Documentation License.
It uses material from the Wikipedia article "Brad Smith."