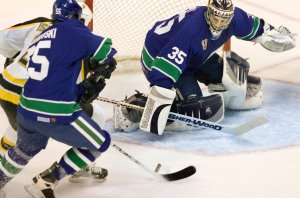 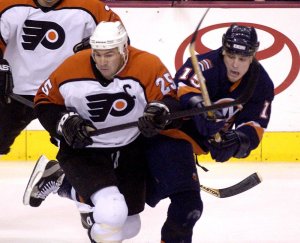 Brad Isbister (born May 7, 1977 in Edmonton, Alberta) is a professional ice hockey left winger who currently plays for EV Zug of the Swiss Nationalliga A.

Growing up in Alberta, Isbister played minor hockey with the Calgary Canucks of the AJHL, recording 49 points in 35 games in 19922007–0893. The following season, he began his junior career with the Portland Winter Hawks of the WHL. After a 16-goal, 36-point season in 1994–95, he was drafted in the third round, 67th overall, by the Winnipeg Jets in the 1995 NHL Entry Draft. Upon being drafted, he returned to the Winter Hawks and recorded 89 points, as well as a team-high 45 goals. In his final year with the Winter Hawks, Isbister recorded 33 points in 24 games and was named to the WHL West Second All-Star Team. That season, he also competed for the Team Canada at the 1997 World Junior Championships and made his professional debut with the Springfield Falcons of the AHL, appearing in 7 games.

Isbister played his first NHL game on October 1, 1997 for the Phoenix Coyotes (formerly the Winnipeg Jets) against the Chicago Blackhawks. His first NHL point was an assist, in a 3–2 Phoenix win over the Colorado Avalanche on October 11. He scored his first NHL goal ten days later on October 21, in a 4–3 loss to the Mighty Ducks of Anaheim. Isbister finished his rookie season with 17 points in 66 games. After his second season with the Coyotes, Isbister was traded to the New York Islanders on March 20, 1999, with a third round draft choice (Brian Collins) in 1999 for Robert Reichel, a third round draft choice (Jason Jaspers) in 1999 and a fourth round draft choice (previously acquired from Ottawa; Phoenix selected Preston Mizzi) in 1999.

FULL ARTICLE AT WIKIPEDIA.ORG
This article is licensed under the GNU Free Documentation License.
It uses material from the Wikipedia article "Brad Isbister."
Back to Article
/