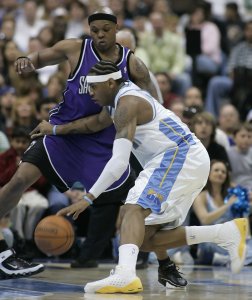 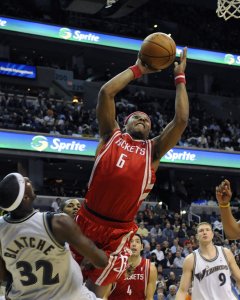 Knowing Rasheed wasn't playing, everybody knew they had to step up

Wells attended Muncie Central High School where after he went on to play at Ball State University, also in Muncie. There he was named MAC freshman of the year in the 1994–1995 season. Wells broke Ron Harper's record of 2,377 points on a one-handed dunk against Northern Illinois on February 21, 1998. The dunk sent the sell-out crowd at University Arena into a frenzy. A timeout was immediately called and Wells was awarded the game ball by Ball State president John Worthen. Wells also led the Mid-American Conference in steals in 1998 with 73, averaging 3.55 steals in 29 games. Wells led the conference in steals during all four years at Ball State and finished his career as the Mid-American Conference all-time career records in points (2,485) and steals (347). While at Ball State he averaged 21.4 PPG, 3 SPG, and 7.3 RPG. He was selected eleventh overall by the Detroit Pistons in the 1998 NBA Draft, but he never played for the Pistons as his draft rights were traded to the Portland Trail Blazers for the Blazers' 1999 first round pick. Six years later Ball State would retire his jersey number, 42, in recognition of his achievements.

As a swingman in Portland, Wells achieved career highs in scoring and improved somewhat on defense, and picked up what some would call an undeserved bad-boy image while sharing the role of co-captain with Rasheed Wallace. Bonzi however did have his share of on and off the court incidents. During his tenure with the Blazers, Bonzi was suspended for two games for publicly cursing at his coach after being taken out of a game. Bonzi was also fined in a separate incident for making an obscene gesture to a fan in a loss to the Philadelphia 76ers. When asked by a media reporter about the incident, he said, "I black out sometimes". Wells was suspended one game without pay and fined $10,000 for intentionally striking and verbally abusing an official in 2000. Bonzi and teammate Erick Barkley in 2001 were cited for criminal trespass after they refused to follow the order of an officer to leave the scene of a fight near a downtown nightclub. This only went to further the team's derisive nickname, Portland Jail Blazers. Trail Blazers management made an oath to the City of Portland to have a team of upstanding Portlanders and drastically restructured the team. In an exchange that emphasized the urgency to release Wells, he was sent to the Memphis Grizzlies in a trade for reserve guard Wesley Person.

FULL ARTICLE AT WIKIPEDIA.ORG
This article is licensed under the GNU Free Documentation License.
It uses material from the Wikipedia article "Bonzi Wells."
Back to Article
/