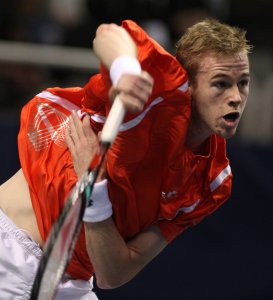 Robert "Bobby" Thomas Reynolds (born on July 17, 1982) in Cape Cod, Massachusetts) is an American professional tennis player who resides in Acworth, Georgia along with fellow pro Robby Ginepri. He frequently partners with Rajeev Ram in doubles. Reynolds attended Harrison High School in Kennesaw, Georgia, graduating in 2000. He was a standout junior tennis player and reached a ranking of number 1 in the U.S. as an 18 year old. Reynolds graduated from Vanderbilt in three years with degree in business, but decided to pursue his professional tennis aspirations.

He reached the third round of the Australian Open in 2005, defeating Nicolas Almagro and Andrei Pavel before falling to Spaniard Rafael Nadal. On February 2, 2009, he reached his career high singles ranking when he reached 63rd in the world. In 2006, he teamed with Andy Roddick to capture his first ATP doubles title at the RCA Championships in Indianapolis.

FULL ARTICLE AT WIKIPEDIA.ORG
This article is licensed under the GNU Free Documentation License.
It uses material from the Wikipedia article "Bobby Reynolds."
Back to Article
/