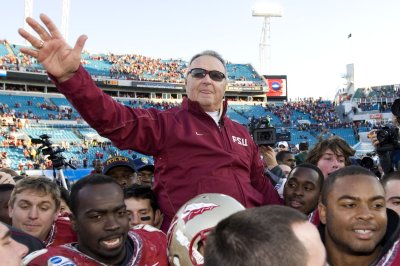 College Football // 2 years ago
Former Nebraska coach Frank Solich to receive Osborne Legacy Award
Frank Solich has had an uneasy relationship with Nebraska since his controversial firing as the university's head football coach in 2003. 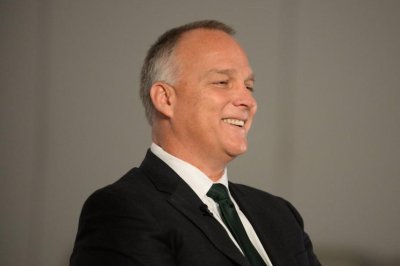 FSU suspensions may include starters Dec 19, 2007

There's no doubt about it, Chris Rix gives us the best chance to win

I talked to him about it and after talking for a while, I felt like he made the right decision

There's no problem whatsoever on our football team right now

Robert Cleckler Bowden (born November 8, 1929 in Birmingham, Alabama) is a former college football coach. He coached the Florida State Seminoles football team from the 1976 to 2009 seasons. During his time at Florida State, Bowden led FSU to an Associated Press and Coaches Poll National Title in 1993 and a BCS National Championship National Title in 1999, as well as twelve Atlantic Coast Conference championships since FSU joined the conference in 1991. After a difficult 2009 season and amid questioning fans, Bowden announced his retirement from FSU on December 1st, just weeks after his 80th birthday. His final coaching appearance was the 2010 Gator Bowl game on January 1st with a 33-21 victory over his former program, West Virginia.

Bowden finished his career second in all-time wins by a Division I-FBS coach with 389 wins. Joe Paterno is the all-time winningest coach. Bowden is tied with Paterno and Paul 'Bear' Bryant for most Division 1A winning seasons at 37. A March 6, 2009 NCAA ruling requiring Florida State to "vacate any games in which an ineligible player participated" threatens to remove 14 of Bowden's wins from the 2006 and 2007 seasons in relation to an academic scandal. As of July 2009, Florida State is appealing the ruling. As of the 2009 season, Bowden was one of four active coaches inducted into the College Football Hall of Fame as coaches (along with Chris Ault, Joe Paterno, and John Gagliardi).

Born in Birmingham, Alabama, Bowden spent a portion of his childhood in bed, sick. When he was 13 years old, Bowden was diagnosed with rheumatic fever. After a six month hospital stay, Bowden was confined to his bed at home for just over a year with nothing more than his imagination to pass the time. It was listening to World War II reports on the radio that began Bowden's interest in the war, an interest he still has to this day. It was also around this time that his love for football increased, as he would listen to University of Alabama football on Saturday mornings.

FULL ARTICLE AT WIKIPEDIA.ORG
This article is licensed under the GNU Free Documentation License.
It uses material from the Wikipedia article "Bobby Bowden."
Back to Article
/