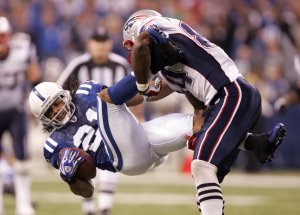 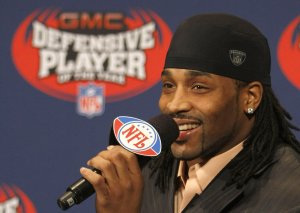 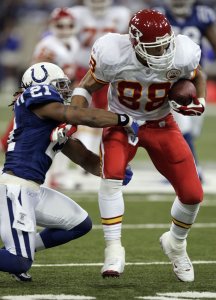 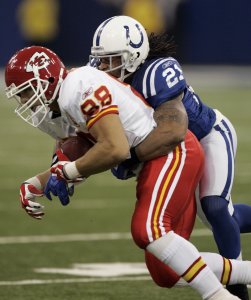 NFL // 4 years ago
Terrell Owens rants on Twitter after Hall of Fame snub
Now it's personal.

Demond "Bob" Sanders (born February 24, 1981 in Erie, Pennsylvania) is an American football safety for the Indianapolis Colts of the National Football League. Sanders was drafted in the second round of the 2004 NFL Draft. He played college football at the University of Iowa. Sanders was named AP NFL Defensive Player of the Year in 2007 and is known for being the integral part of the Colts' postseason defense that led the team to a victory in Super Bowl XLI. Nicknamed "The Hitman" because of his hard hits and tackles. Another nickname that has stuck is "The Sandman" because of his last name.

Born with a name (Demond) that was difficult for many to pronounce correctly, Sanders asked his mother if his name could be changed. His mother suggested "Bob" as a nickname, and the name stuck. His parents are Jean and Marion Sanders.

Sanders attended Erie Central High School as a freshman before transferring to Cathedral Preparatory School in Erie, Pennsylvania and was a student and a letterman in football as a running back and as a safety. In football, he was a four-year letterman, a two-time All-Conference selection. As a junior, he was a third-team All-State selection. As a senior, he was a team captain, and a first team All-State selection and finished his senior season with 900 rushing yards and 17 touchdowns while leading his team to a 13-1 record and a trip to the state championship game. Sanders graduated from Cathedral Preparatory School in 2000. He also had 7 sacks in a high school state championship. He also kick boxed during his childhood.

FULL ARTICLE AT WIKIPEDIA.ORG
This article is licensed under the GNU Free Documentation License.
It uses material from the Wikipedia article "Bob Sanders."