World News // 6 months ago
Myanmar: Dozens dead, factories set on fire amid coup protests
At least 38 people were killed as protesters and junta security forces clashed in Myanmar on Sunday prompting the military to declare martial law following one of the bloodiest days yet since its coup. 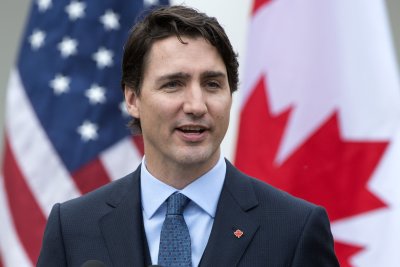 World News // 5 years ago
Canadian hostage killed in Philippines after ransom deadline passes; Trudeau 'outraged'
Canadian leader Justin Trudeau was outraged Monday by the death of a Calgary man who was killed by militants in the Philippines after a ransom deadline expired.
World News // 8 years ago
Spence ends 43-day hunger strike
Leaders of Canada's First Nations population vowed to keep pressure on the government as Chief Theresa Spence ended a 43-day hunger strike.
World News // 9 years ago
Canada Liberals to debate end of monarchy
The youth wing of Canada's Liberal Party says it wants a debate on abolishing the monarchy during this month's party convention.
World News // 9 years ago
Rightist criminal reform bill up in Canada
Canada's Conservative party flexed its new parliamentary majority muscle Tuesday in Ottawa, introducing sweeping rightist judicial reform legislation.
Top News // 1 decade ago
Tories admit plagiarism; strategist quits
A senior Conservative official resigned Tuesday after admitting he plagiarized almost half a speech Stephen Harper made urging Canada to send troops into Iraq.
Top News // 1 decade ago
Canadian candidate done in by his blogging
A Conservative Party member running for Parliament has quit his election campaign after posting controversial blogs online, officials say.
Top News // 1 decade ago
Canadian Liberals back U.S. deserters
The Canadian opposition Liberal Party is calling for a halt to next week's deportation of a U.S. Army deserter and his family.
Top News // 1 decade ago
Canada's Harper firm on no Olympic visit
Canadian Prime Minister Stephen Harper isn't following the lead of France and the United States and refuses to attend the Olympics in Beijing.

How does a leader in Canada's Parliament, on such a crucial issue, end up giving almost the exact same speech as any another country's leader, let alone a leader who was a key member of George W. Bush's Coalition of the Willing

Canada accepted over 50,000 people during the Vietnam War and Canada has benefited greatly from them

The Senate is a child of the Constitution of Canada. It doesn't belong to Stephen Harper

Robert Keith "Bob" Rae, PC, OC, OOnt, QC, MP (born August 2, 1948) is a Canadian politician. He is the Member of Parliament for Toronto Centre and interim leader of the Liberal Party of Canada.

Rae was a New Democratic Party (NDP) Member of Parliament from 1978 to 1982. Then he moved to provincial politics, becoming leader of the Ontario New Democratic Party from February 7, 1982 to June 22, 1996. He served as the 21st Premier of Ontario from October 1, 1990 to June 26, 1995, and was the first person to have led a provincial NDP government east of Manitoba. While in office, he brought forward a number of initiatives that were unpopular with many traditional NDP supporters, such as the Social Contract. Rae's subsequent disagreement with the leftward direction of the NDP led him to resign his membership and join the Liberals.

In 2006, he was a candidate for the leadership of the Liberal Party of Canada, finishing in third place on the third ballot. He had originally been a Liberal in the 1970s before joining the NDP. Rae returned to the Canadian House of Commons on March 31, 2008 as a Liberal MP after winning a March 17, 2008 by-election holding the riding that had previously been held by Liberal Bill Graham. He was re-elected in the 2008 general election. Rae ran again as a candidate for the party leadership but withdrew on December 12, 2008. He was re-elected in the Toronto Centre riding in the 2011 general election and was named interim leader of the Liberal Party weeks later, replacing Michael Ignatieff.

FULL ARTICLE AT WIKIPEDIA.ORG
This article is licensed under the GNU Free Documentation License.
It uses material from the Wikipedia article "Bob Rae."
Back to Article
/