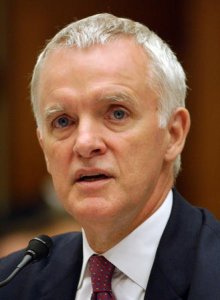 Joseph Robert "Bob" Kerrey (born August 27, 1943) was the 35th Governor of Nebraska from 1983 to 1987 and a U.S. Senator from Nebraska (1989–2001). He was also an unsuccessful candidate for the Democratic presidential nomination in 1992. Since leaving the Senate he has served as president of The New School, a university in New York City.

Kerrey was born in Lincoln, Nebraska and attended Lincoln Northeast High School, where he credits his chemistry teacher, Bob Reese, for inspiring him to pursue a career in the sciences. He went on to graduate from the University of Nebraska-Lincoln in 1966 with a degree in pharmacy. During his senior year at Nebraska, he was a member of the Society of Innocents, the chancellor's senior honorary.

Kerrey served in the United States Navy as a SEAL from 1966 to 1969 during the Vietnam War, lost the lower part of one leg in combat, and received the Medal of Honor. He was a member of Phi Gamma Delta.

FULL ARTICLE AT WIKIPEDIA.ORG
This article is licensed under the GNU Free Documentation License.
It uses material from the Wikipedia article "Bob Kerrey."
Back to Article
/