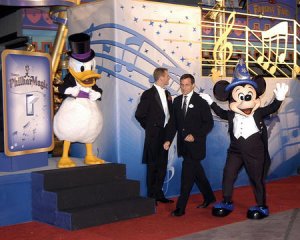 TV // 1 year ago
'The Mandalorian' Season 2 set for October
"The Mandalorian" Season 2 will be coming to Disney+ in October, Disney CEO Bob Iger announced during an earnings call.

U.S. News // 1 year ago
Disney takes control of Hulu, will buy Comcast's stake in 2024
Disney announced Tuesday that it has taken full operational control of the popular streaming service Hulu after Comcast agreed to sell its 33 percent interest in the company by 2024.

Go on any street corner and say what you like, even if it's about the company you work for

Write an op-ed in the New York Times, appear on Larry King if you want

Robert A. "Bob" Iger (born February 10, 1951) is the president and chief executive officer of The Walt Disney Company. He was named president of Disney in 2000, and later succeeded Michael Eisner as chief executive in 2005, after a successful effort by Roy E. Disney to shake-up the management of the company. Iger oversaw the acquisition of Pixar in 2006, following a period of strained relations with the animation studio. He also led the company to acquire Marvel Entertainment, further broadening the Disney company's character franchises, in 2009.

His mother worked at Boardman Junior High School in Oceanside, New York and his father was executive vice president and general manager of the Greenvale Marketing Corporation, and a professor of advertising and public relations.

Iger completed his undergraduate studies at Ithaca College where he graduated magna cum laude with a Bachelor of Science degree in Television & Radio from Ithaca's Roy H. Park School of Communications. He then began his career as a weatherman for a local television station. He joined the American Broadcasting Company in 1973 and gradually rose through its ranks. Iger was instrumental in convincing ABC to pick up David Lynch's offbeat but influential Twin Peaks. He served as president of the ABC Network Television Group from 1993 to 1994, and then was named president and chief operating officer of ABC's corporate parent, Capital Cities/ABC. In 1996, The Walt Disney Company bought Capital Cities/ABC and renamed it ABC, Inc., where Iger remained president until 1999.

FULL ARTICLE AT WIKIPEDIA.ORG
This article is licensed under the GNU Free Documentation License.
It uses material from the Wikipedia article "Bob Iger."
Back to Article
/