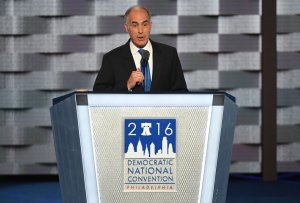 U.S. News // 8 months ago
COVID-19: Building trust key to healthcare for seniors of color, experts say
Elderly Black and Latino Americans may be less likely to get COVID-19 vaccine due to historic distrust of the healthcare system, experts told Congress on Tuesday.

U.S. News // 2 years ago
Voters in 4 states set primary matchups for November midterms
Midterm primaries in four states cast their ballots Tuesday, giving a peek at the candidates who will be up for several Congress and Senate seats in November.

Now we have no choice but to require Congress to approve any U.S.-Iraq strategic agreement that includes provisions committing the United States to the defense of Iraq against aggression

With the cost of the war increasing every day, the need for a new course out of Iraq has never been clearer. Democrats have tried to set that course again and again this year, but each time, President Bush and his Republican allies in Congress have blocked us

Bob Casey (April 11, 1925 - March 27, 2005) was the only public address announcer in Minnesota Twins history until 2005. He started announcing Twins games when the franchise moved to Minnesota from Washington, D.C., in 1961.

Prior to working for the Twins, Casey served as the announcer of the Minneapolis Millers, a Triple-A team in the old American Association, for 10 years. He also worked for the Minneapolis Lakers and the Minnesota Vikings during his career.

FULL ARTICLE AT WIKIPEDIA.ORG
This article is licensed under the GNU Free Documentation License.
It uses material from the Wikipedia article "Bob Casey."
Back to Article
/