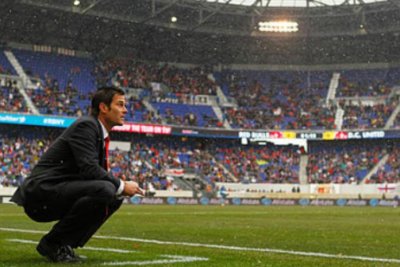 This is the beginning of a big year for the national team, and it is important that we get started off heading in the right direction

I am very proud and honored to be named head coach of the U.S. National Team

Robert "Bob" Bradley (born March 3, 1958 in Montclair, New Jersey) is the former manager of the United States men's national soccer team. Before taking over the national team in December 2006, he previously coached in the American college game and later in Major League Soccer, managing the Chicago Fire, MetroStars, and Chivas USA over nine seasons.

His son, Michael Bradley, is a professional footballer playing for Borussia Mönchengladbach in the Bundesliga and the U.S. national team.

Bradley was born and raised in New Jersey, playing soccer at West Essex High School and Princeton University. Following his graduation from Princeton, Bradley briefly worked in the Procter & Gamble's executive training program before entering the Ohio University sports management program in 1981. While there, Bradley's managing career started when he was named the manager of Ohio University's Division 1 soccer program at the age of 22.

FULL ARTICLE AT WIKIPEDIA.ORG
This article is licensed under the GNU Free Documentation License.
It uses material from the Wikipedia article "Bob Bradley."
Back to Article
/