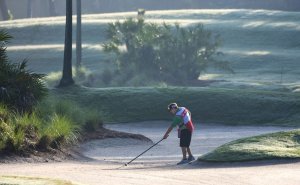 I guess there comes a point where you draw a line in the sand and say 'enough's enough,

Van Pelt was born in Richmond, Indiana. He attended Oklahoma State University and is a member of the Sigma Chi Fraternity.

Van Pelt plays on the PGA Tour and captured his first victory on tour in 2009 at the U.S. Bank Championship in Milwaukee. He has featured in the top 50 of the Official World Golf Rankings. He won the Omaha Classic on the Nationwide Tour in 2003 after shooting a final round of 62.

FULL ARTICLE AT WIKIPEDIA.ORG
This article is licensed under the GNU Free Documentation License.
It uses material from the Wikipedia article "Bo Van Pelt."
Back to Article
/