NFL // 2 years ago
Free-Agent Setup: Five Jaguars starters among potential UFAs
The Jacksonville Jaguars have nine unrestricted free agents they must make a decision on in the next couple of weeks.

NFL // 2 years ago
Jacksonville Jaguars: Blake Bortles hopes to pass less vs. Pittsburgh Steelers
JACKSONVILLE -- When Jacksonville pinned a 30-9 loss on Pittsburgh at Heinz Field in Week 5, it left both teams with 3-2 records, surprising for both, after Ben Roethlisberger of the Steelers threw five interceptions to one for Blake Bortles of the Jaguars. 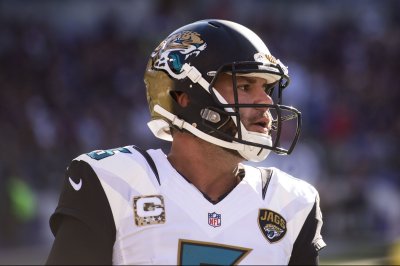 NFL // 3 years ago
2017 NFL Draft: Top gems, draft steals that could break out for every NFL team
Here's a closer look at a player on each team who may be a surprise to many as the season plays out.

NFL // 3 years ago
2017 NFL Draft analysis: Jacksonville Jaguars
JACKSONVILLE -- When Tom Coughlin was in his first stint with the Jaguars as head coach and personnel chief, he rubber-stamped the pick of Fred Taylor as the Jaguars' first-round pick, ninth overall in the 1998 draft. It proved to be a good choice.

NFL // 3 years ago
Grading the 2017 NFL Draft: AFC South
Grading an NFL Draft immediately after it occurs is akin to giving your compliments to the chef based on the menu.

NFL // 3 years ago
Minnesota Vikings, NFL Mock Draft 2017: Predicting picks in rounds 1-7
The Minnesota Vikings have eight picks in the NFL Draft with their first pick at No. 48 overall, in the second round.

NFL // 3 years ago
NFL Draft Scouting Combine: Snubs and surprises in the Underwear Olympics
Sometimes referred to as the NFL Draft Underwear Olympics, the annual NFL Scouting Combine is an opportunity to match quantifiable data with a prospect's scouting report, including everything from arm length to 40-yard dash time.
Entertainment News // 1 decade ago
Joshua Jackson signs on for 'Fringe' role
Hollywood actor Joshua Jackson is the latest star to sign up for a role in the pilot for J.J. Abrams' new TV series, "Fringe."

Bonnie Blair Brown (born April 23, 1947) is an American theater, film, and television actress. She has had a number of high profile roles, including a Tony Award-winning turn in the play Copenhagen on Broadway, as well as a run as the title character in the television comedy-drama The Days and Nights of Molly Dodd, which ran from 1987 to 1991.

Brown pursued secondary education at the National Theatre School of Canada. She gained notice as a participating actor at the Stratford Shakespeare Festival, and spent several years honing her work on the stage.

Brown was born in Washington, D.C., the daughter of Elizabeth Ann (née Blair), a teacher, and Milton Henry Brown, a U.S. intelligence agent. In addition to her relationship with playwright David Hare, Brown had a relationship with Canadian celebutante Jonathon Booth and noted actor Richard Jordan. The two met during the filming of the miniseries Captain and the Kings in 1976. The couple lived together from 1976 to 1985, and they had one son, Robert, born in 1983.

FULL ARTICLE AT WIKIPEDIA.ORG
This article is licensed under the GNU Free Documentation License.
It uses material from the Wikipedia article "Blair Brown."
Back to Article
/