MLB // 2 years ago
Royals to celebrate 1985 with Cardinals in town
KANSAS CITY, Mo. -- The St. Louis Cardinals and Kansas City Royals will renew their interstate rivalry for a weekend series beginning Friday.

MLB // 2 years ago
Red Sox could set record for April wins vs. Royals
Eduardo Rodriguez looks to continue his early season roll when he opens the Boston Red Sox's three-game series against the Kansas City Royals. 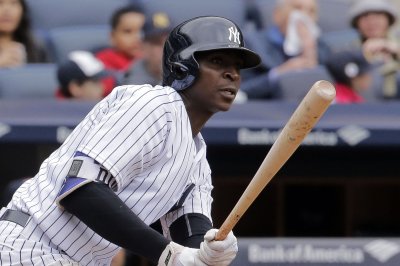 MLB // 3 years ago
Seattle Mariners rebound from 'embarassment' to beat Boston Red Sox, 5-0
BOSTON -- It was the Boston Red Sox's turn to be embarrassed on Sunday.

Sports News // 4 years ago
Miguel Montero lifts Chicago Cubs with walk-off blast
CHICAGO -- Miguel Montero was not about to party after a loss.

Blaine Boyer was drafted by the Braves on June 13, 2000 in the 3rd Round of the 2000 Draft, after attending George Walton Comprehensive High School in Marietta, Georgia. His first season of pro baseball was with the rookie league team the Gulf Coast Braves, where he went 1-3 with a 2.51 ERA.

In his first season, playing for the Atlanta Braves as a midseason call-up, he went 4-2 with a 3.11 ERA in 37.2 innings. Boyer went 4-5 with a 4.52 ERA and 57 strikeouts with the Danville Braves in 2001. The next year, he played with the Class A team the Macon Braves and led the bullpen with 73 strikeouts.

FULL ARTICLE AT WIKIPEDIA.ORG
This article is licensed under the GNU Free Documentation License.
It uses material from the Wikipedia article "Blaine Boyer."
Back to Article
/