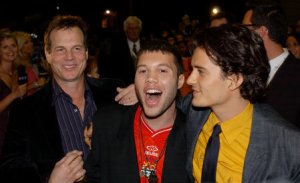 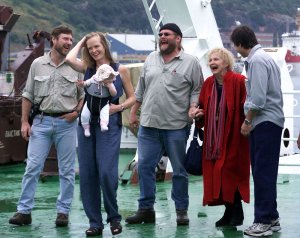 Entertainment News // 3 years ago
'Twister' and 'Titanic' star Bill Paxton dead at 61
Well-known actor Bill Paxton has died at the age of 61, his family confirmed to ABC News Sunday.

Movies // 3 years ago
'The Circle': Emma Watson gives up privacy in new trailer
Emma Watson discovers the dark side of Tom Hanks' powerful technology company in an adaptation of the Dave Eggers novel "The Circle."

Movies // 3 years ago
Emma Watson, Tom Hanks star in first 'The Circle' trailer
Emma Watson and John Boyega discover the dark side of Tom Hanks' powerful technology company in an adaptation of the David Eggers novel "The Circle."

Top News // 4 years ago
The Almanac
On May 17, 1954, the Supreme Court, in Brown v. Board of Education ruled unanimously that racial segregation in public schools was unconstitutional.

William "Bill" Paxton (born May 17, 1955) is an American actor and film director. He gained popularity after starring roles in the movies Apollo 13, Twister, Aliens, True Lies, and Titanic. Paxton also starred in the HBO series Big Love, which aired between 2006 and 2011.

Paxton was born and raised in Fort Worth, Texas, to Mary Lou (née Gray) and John Lane Paxton, a businessman, lumber wholesaler, museum executive, and occasional actor. Paxton was raised Catholic, his mother's religion, and attended St. Anne's Catholic School. He attended Arlington Heights High School in Fort Worth, Texas, and Southwest Texas State University in San Marcos, Texas. After graduation, he moved to Los Angeles, California, and began working for the movie director Roger Corman as a set designer on his movies. His experiences working behind the camera influenced Paxton's decision to pursue acting, which led him to relocate to New York City where he studied under Stella Adler.

Paxton has played many distinctive and memorable characters, including the sneering older brother Chet Donnelly in John Hughes' Weird Science; the loud-mouthed Colonial Marine Private William Hudson in James Cameron's Aliens; astronaut Fred Haise in Ron Howard's Apollo 13; the sadistic vampire Severen in Kathryn Bigelow's film Near Dark; tornado researcher Bill Harding with Helen Hunt in the blockbuster Twister; the treasure hunter to whom Rose's story is told in Titanic; and the sleazy car salesman in True Lies. Paxton has the distinction of being one of only two actors, the other being Lance Henriksen, who has starred alongside an Alien, a Predator, and a Terminator. He further holds a distinct honor of being the only actor to have been "killed" by all three, as each of his characters in these films meets his end during conflict with the lead antagonists.

FULL ARTICLE AT WIKIPEDIA.ORG
This article is licensed under the GNU Free Documentation License.
It uses material from the Wikipedia article "Bill Paxton."
Back to Article
/