U.S. News // 1 month ago
Democrats call for release of Trump's tax records after 'blockbuster' report
Democrats on Sunday renewed calls for President Donald Trump's tax records to be released following a New York Times report showing he has not paid taxes in 10 of the last 15 years through to 2017. 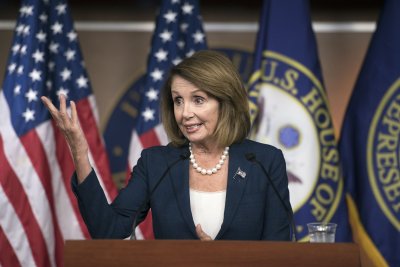 U.S. News // 3 years ago
Democrats re-elect Nancy Pelosi as House minority leader
Democrats in the House of Representatives re-elected California Rep. Nancy Pelosi to serve as House Minority Leader on Wednesday.
U.S. News // 6 years ago
Debate on safety net programs exposes divisions 50 years after War on Poverty
Paul Ryan blaming President Lyndon Johnson's 50-year-old War on Poverty for making things worse for the nation's poor.
U.S. News // 6 years ago
The Issue: Is the ACA a job engine or disincentive to work?
Healthcare reform is either an economic engine that will lead to an increase in jobs and reduction in the U.S. budget deficit or it's a disincentive for people to work and companies to hire employees, and will drag down the economy.
U.S. News // 7 years ago
Lautenberg remembered as 'good man' in funeral attended by hundreds
Sen. Frank Lautenberg was recalled as "a mensch [good man] through and through" Wednesday at a New York memorial attended by governors and top U.S. lawmakers.
U.S. News // 7 years ago
UPI NewsTrack TopNews
News from United Press International, around the world around the clock ...
U.S. News // 7 years ago
House OKs $51B Sandy aid bill
The U.S. House Tuesday approved $51 billion in aid for states ravaged by Superstorm Sandy, though opponents insisted it's a spending "grab bag."

The industry needs an overhaul. This is not going to be stopped on a state-by-state basis. This is a situation that needs national attention

I've worked for many years on this problem. In the beginning we could fit us into a phone booth. So much has happened since

We had a strenuous few days in Afghanistan, but it was the most productive trip I've ever been on as a member of Congress

William J. "Bill" Pascrell, Jr. (born January 25, 1937) is the U.S. Representative for New Jersey's 8th congressional district, serving since 1997. He is a member of the Democratic Party. The district is based in Paterson and includes most of Passaic County and suburban Essex County.

The grandson of Italian immigrants, Pascrell was born in Paterson, New Jersey and attended St. George’s Elementary School, and in 1955 graduated from St. John the Baptist High School, during which he was elected Student Council President. Pascrell later went on to attend Fordham University in New York with Bachelor’s degree in Journalism and a Master’s degree in Philosophy.

Pascrell spent 12 years as a high school teacher in Paramus, New Jersey before being hired as a professor at Fairleigh Dickinson University. Previously, Pascrell was appointed to Paterson Board of Education, where he served as President of the Board. He also served as Board of Trustees of Passaic County Community College.

FULL ARTICLE AT WIKIPEDIA.ORG
This article is licensed under the GNU Free Documentation License.
It uses material from the Wikipedia article "Bill Pascrell."
Back to Article
/