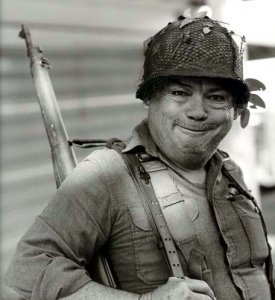 William Henry "Bill" Mauldin (October 29, 1921 – January 22, 2003) was a two-time Pulitzer Prize-winning editorial cartoonist from the United States. He was most famous for his World War II cartoons depicting American soldiers, as represented by the archetypal characters Willie and Joe, two weary and bedraggled infantry troopers who stoically endure the difficulties and dangers of duty in the field. These cartoons were broadly published and distributed in the American army abroad and in the United States.

Mauldin was born in Mountain Park, New Mexico. His grandfather had been a civilian cavalry scout in the Apache Wars and his father was an artilleryman in World War I. After growing up there and in Phoenix, Arizona, Mauldin took courses at the Chicago Academy of Fine Arts under the tutoring of Ruth VanSickle Ford. While in Chicago, Mauldin met Will Lang Jr. and became fast friends with him. Mauldin entered the U.S. Army via the Arizona National Guard in 1940.

While in the 45th Infantry Division, Mauldin volunteered to work for the unit's newspaper, drawing cartoons about regular soldiers or "dogfaces". Eventually he created two cartoon infantrymen, Willie (who was modeled after his fellow comrade and friend Irving Richtel) and Joe, who became synonymous with the average American GI. His cartoon work continued as he fought in the July 1943 invasion of Sicily and the Italian campaign. Mauldin began working for Stars and Stripes, the American soldiers' newspaper; by March 1944 he was given his own jeep by which he roved the front, collecting material and producing 6 cartoons a week. His cartoons were viewed by soldiers all over Europe during World War II, and also published in the United States. Willie was on the cover of Time Magazine in 1945, and Mauldin himself made the cover in 1958.

FULL ARTICLE AT WIKIPEDIA.ORG
This article is licensed under the GNU Free Documentation License.
It uses material from the Wikipedia article "Bill Mauldin."