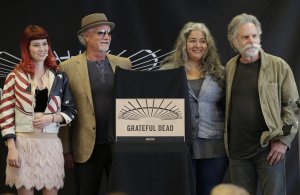 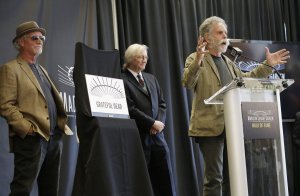 Music // 2 years ago
Bob Weir and Wolf Bros to kick off tour in February
Former Grateful Dead member Bob Weir will reunite with Don Was and Jay Lane for a new spring tour.

I had a couple of lyrics I was singing wrong

Bill Kreutzmann (born May 7, 1946 in Palo Alto, California) is an American drummer who played with rock band the Grateful Dead for their entire thirty-year career.

Kreutzmann started playing drums at the age of 13, despite having been told by his sixth grade music teacher that he couldn't keep a beat. As a teenager, he met Aldous Huxley at his high school, who encouraged him in his drumming. At the end of 1964 he co-founded the band The Warlocks, along with Phil Lesh, Jerry Garcia, Bob Weir, and Ron "Pigpen" McKernan. Their first real gig was May 5, 1965, two days before Kreutzmann's nineteenth birthday. During the band's early days, Kreutzmann sometimes used a fake draft card with the name "Bill Sommers" to be admitted to bars where the band was playing, since he was underage. In November 1965, the Warlocks became the Grateful Dead. Meeting fellow percussionist Mickey Hart in the fall of 1967 would have a big impact on Kreutzmann's career. Hart soon joined the Dead, making it one of the first (and few) rock bands to feature two drummers. The two percussionists' remarkable cohesion, synchronicity, and driving power became a hallmark of the Grateful Dead sound, and earned them the nickname "the Rhythm Devils". Their lengthy drum duets were a feature of every show from 1979–1995, and are documented in a number of recordings by the band. Kreutzmann remained with the Grateful Dead until its dissolution following the passing of Garcia in 1995, making him one of four members to play at every one of the band's 3,500 shows, along with Garcia, Weir and Lesh.

Kreutzmann's first post-Dead musical project was Backbone, a trio with guitarist Rick Barnett and bassist Edd Cook. They released a self-titled album in 1998.

FULL ARTICLE AT WIKIPEDIA.ORG
This article is licensed under the GNU Free Documentation License.
It uses material from the Wikipedia article "Bill Kreutzmann."