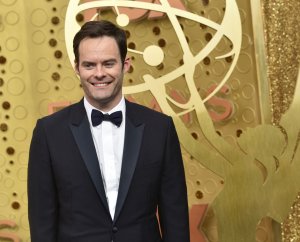 TV // 5 days ago
HBO renews 'Barry' for Season 4
HBO announced the renewal of "Barry" for a fourth season on Thursday. Season 3 will air its finale June 12.

TV // 4 months ago
Kristen Wiig, Willem Dafoe interrupt Will Forte's first 'SNL' guest host monologue
Will Forte joked that "Saturday Night Live" was just saving the best for last by waiting to invite him to guest host for the first time, 12 years after he left as a cast member.

I was working as an assistant editor for 'Iron Chef' and I was doing sketch comedy in my free time, and I went to a show and Megan Mullally was in the audience because her brother-in-law was in the show, and afterward she was like, 'You were really funny!' And I didn't think anything of it

William "Bill" Hader (born June 7, 1978) is an Emmy- and Peabody award-winning American actor, comedian, writer, producer, and repertory player on Saturday Night Live. He is also known for his supporting roles in numerous comedy films, starring in at least three films a year since 2006.

Hader was born and raised in Tulsa, Oklahoma, where he attended Patrick Henry Elementary School, Edison Junior High and Cascia Hall Preparatory School, before attending The Art Institute of Phoenix and Scottsdale Community College. Hader's comedic aspirations eventually led him to Los Angeles where he joined the Second City, a comedy troupe that has been a training ground for many SNL cast members since the 1970s. He also performed at iO West in Los Angeles. During his time at Second City and iO West, Hader worked as a production assistant on the DVD Empire of Dreams: The Story of the Star Wars Trilogy and Collateral Damage, as well as an assistant on VH1's The Surreal Life. Prior to SNL, Hader was perhaps most known for his work as a "field agent" on MTV's Punk'd.

Hader was "discovered" by Megan Mullally of Will & Grace while working with the Los Angeles-based comedy troupe, "Animals from the Future." Mullally brought him to the attention of SNL producer Lorne Michaels. Hader was hired as a "featured player" and made his debut on the show on October 1, 2005. His first role was as a psychologist giving his views about life and death during the emergency landing of Jet Blue Flight 292. Hader is known for his impressions of famous people, such as Vincent Price in the Variety Vault sketches and Al Pacino.

FULL ARTICLE AT WIKIPEDIA.ORG
This article is licensed under the GNU Free Documentation License.
It uses material from the Wikipedia article "Bill Hader."