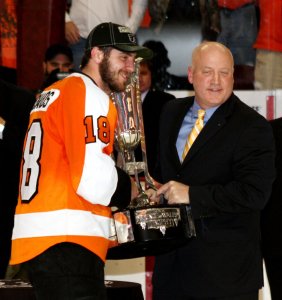 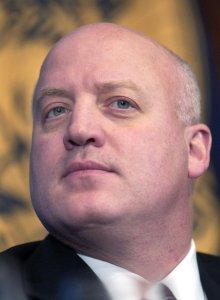 NHL // 1 month ago
NHL, Canada agree to allow cross-border travel for playoffs
A United States-based hockey team will play an NHL game in Canada for the first time since 2020 after the league reached an agreement with the Canadian government to allow teams to cross the border for playoff games.

NHL // 7 months ago
NHL, union reach tentative agreement on 56-game season starting Jan. 13
The NHL and its players' association reached a tentative deal Friday to stage a 56-game season in 2021. 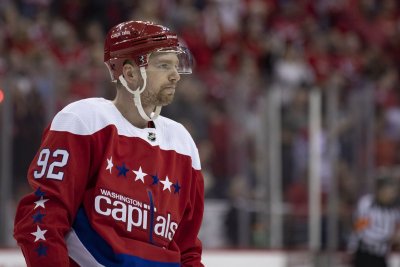 NHL // 5 years ago
Blackhawks' Andrew Shaw gets one game suspension, fine
The NHL suspended Chicago Blackhawks forward Andrew Shaw for one game for using a gay slur and fined him $5,000 for directing an inappropriate gesture at the game officials during a playoff loss to the St. Louis Blues on Tuesday night.

In the absence of a collective bargaining agreement, we are not able to conduct an entry draft in the traditional sense on the dates scheduled

William L. "Bill" Daly (born 1964) is an attorney and the Current Deputy Commissioner and chief legal officer of the NHL under Commissioner Gary Bettman. He is also a Hockey Hall of Fame Board Member and former NHL Vice President and Chief Legal Officer. Before joining the NHL front office he worked for the New York law firm of Skadden, Arps, Slate, Meagher & Flom, LLP. He received his bachelor's degree from Dartmouth and his law degree from New York University School of Law. He is a big fan of the Miami Dolphins, and currently resides in New Jersey.

FULL ARTICLE AT WIKIPEDIA.ORG
This article is licensed under the GNU Free Documentation License.
It uses material from the Wikipedia article "Bill Daly."
Back to Article
/