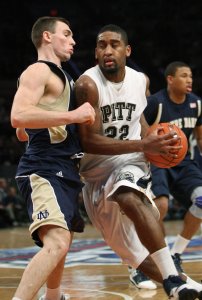 Ben Hansbrough (born December 23, 1987) is an American basketball player who plays guard for the University of Notre Dame. Currently a fifth-year senior for the Fighting Irish, Hansbrough transfered from Mississippi State after his sophomore year.

Ben, who is 6'3" and weighs 203 lbs, is averaging 17.9 points per game, shooting 42.1% from three-point range in his final year at Notre Dame. He is also the younger brother of Tyler Hansbrough, the former Naismith College Player of the Year in 2007–08. In his final season at Notre Dame, Ben was named to the All-Big East team, he was the lone unanimous pick for it. He also was chosen as the 2010-2011 Big East Player of the Year.

FULL ARTICLE AT WIKIPEDIA.ORG
This article is licensed under the GNU Free Documentation License.
It uses material from the Wikipedia article "Ben Hansbrough."
Back to Article
/