Golf // 3 years ago
Golf notebook: Tiger Woods may have found his fallback career
Tiger Woods underwent his fourth back surgery in 40 months last week, and if he never hits another shot in competition, Woods should have an excellent fallback profession as a course designer.

Sports News // 3 years ago
Sergio Garcia wins Masters in playoff for first major title
Sergio Garcia of Spain birdied the first hole in a sudden-death playoff to outlast Justin Rose of England and win the Masters on Sunday. 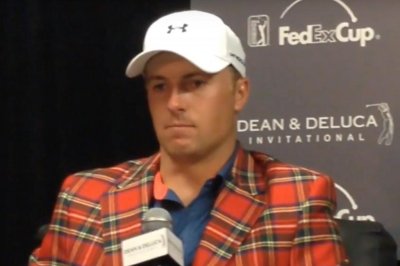 Sports News // 4 years ago
Jordan Spieth soars down stretch to notch win
FORT WORTH, Texas -- Jordan Spieth ended any discussion about a hangover from his Masters back-nine meltdown in emphatic fashion Sunday.

Sports News // 5 years ago
Masters First Round News & Notes
Having not played since withdrawing from the Farmers Insurance Open back in early February, Tiger Woods opened up with a 1-over 73 at the Masters on Thursday.

Sports News // 5 years ago
79th Masters Tournament Preview
The first major of the year is upon us and there are plenty of questions about a couple of formers champions, while most eyes will be on a player looking for his first green jacket.
Sports News // 6 years ago
Pinehurst: The story behind the man and his links course
Many modern golf courses in the U.S. are touted as links courses, usually the only thing resembling a links is the lack of trees, the exception is Pinehurst.
Sports News // 7 years ago
Adam Scott edges Angel Cabrera on 2nd playoff hole for Masters win
Adam Scott drained a 12-foot birdie putt on the second playoff hole Sunday, defeating Angel Cabrera to become the first Australian to win the Masters.
Sports News // 7 years ago
Youngest Masters entrant ready at 14
Tianlang Guan, 14, will compete in the upcoming Masters Golf Tournament in Augusta, Ga., the youngest to ever play in the prestigious event.
Sports News // 9 years ago
Cochran shoots 62 in Champions Tour opener
Russ Cochran had two eagles, flirted with a 59 and settled for a 10-under 62 Friday to take the lead after one round of the Mitsubishi Electric Championship.

Crenshaw was born in Austin, Texas. He attended and played golf at Austin High School and the University of Texas, where he won three NCAA Championships from 1971 to 1973. He turned professional in 1973.

In 1973, Crenshaw became the second player in Tour history to win the first event of his career; this accomplishment was achieved earlier by Marty Fleckman (1967) and later repeated by Robert Gamez (1990) and Garrett Willis (2001). Following five runner-up finishes in major championships without a victory, including losing a sudden-death playoff for the 1979 PGA Championship, in 1984 he won The Masters. In the mid-1980s, he suffered from Graves' disease, a disease of the thyroid, but he continued to accumulate victories, finishing with 19 on the PGA Tour, including an emotional second Masters victory in 1995, which came a week after the death of his mentor Harvey Penick.

FULL ARTICLE AT WIKIPEDIA.ORG
This article is licensed under the GNU Free Documentation License.
It uses material from the Wikipedia article "Ben Crenshaw."
Back to Article
/