Odd News // 6 months ago
House used for 'Golden Girls' exterior shots listed for $3 million
A Southern California house made famous by outdoor shots in the first season of classic sitcom "The Golden Girls" is being listed for sale for the first time ever with an asking price of near $3 million.

Entertainment News // 1 year ago
Bill Macy, 'Maude' star, dead at 97
Actor Bill Macy, who portrayed Walter Findlay on "All in the Family" spinoff series "Maude," has died at the age of 97. 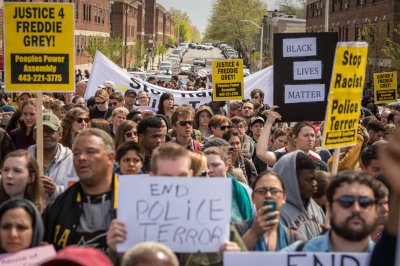 Top News // 4 years ago
The Almanac
On April 25, 2015, protests broke out in Baltimore following the death of Freddie Gray, a 25-year old black man, while in police custody.

Entertainment News // 5 years ago
'The Golden Girls' LEGO set needs votes to become a reality
A LEGO set featuring characters for the NBC sitcom "The Golen Girls" is votes away from becoming a reality.
Odd News // 6 years ago
The Almanac
UPI Almanac for Friday, April 25, 2014
TV // 7 years ago
Jimmy Kimmel bought nude Bea Arthur painting for $1.9M
U.S. comedian Jeffrey Ross tweeted a photo of himself with a nude painting of the late sitcom star Bea Arthur, saying the work was a gift from Jimmy Kimmel.

She's been out of it so many years, not recognizing anyone. It's a godsend. She's at peace

Beatrice "Bea" Arthur (May 13, 1922 - April 25, 2009) was an American actress, comedienne and singer whose career spanned seven decades. Arthur achieved fame as the character Maude Findlay on the 1970s sitcoms All in the Family and Maude, and as Dorothy Zbornak on the 1980s sitcom The Golden Girls, winning Emmy Awards for both roles. A stage actress both before and after her television success, she won the Tony Award for Best Featured Actress in a Musical for her performance as Vera Charles in the original cast of Mame (1966).

Arthur was born Bernice Frankel to Jewish parents Philip and Rebecca Frankel in New York City on May 13, 1922. In 1933 her family moved to Cambridge, Maryland, where her parents operated a women's clothing shop. She attended Linden Hall High School, an all girls school in Lititz, Pennsylvania, before enrolling in the now-defunct Blackstone College for Girls in Blackstone, Virginia, where she was active in drama productions. During World War II she served 30 months in the Marine Corps, where she was one of the first members of the Women’s Reserve and spent time as a typist and a truck driver despite publicly denying any military service. When she enlisted, Arthur was described as "argumentative and "over-aggressive." The recruitment officer concluded, however, that she is: "Officious—but probably a good worker—if she has her own way!"

From 1947, Bea Arthur studied at the Dramatic Workshop of The New School in New York with German director Erwin Piscator. Arthur began her acting career as a member of an off Broadway theater group at the Cherry Lane Theatre in New York City in the late 1940s. On stage, her roles included Lucy Brown in the 1954 Off-Broadway premiere of Marc Blitzstein's English-language adaptation of Kurt Weill's Threepenny Opera, Yente the Matchmaker in the 1964 premiere of Fiddler on the Roof on Broadway, and a 1966 Tony Award-winning portrayal of Vera Charles to Angela Lansbury's Mame. She reprised the role in the 1974 film version opposite Lucille Ball. In 1981, she appeared in Woody Allen's The Floating Light Bulb. She made her debut at the Metropolitan Opera in 1994 portraying the Duchess of Krakenthorp, a speaking role, in Gaetano Donizetti's La fille du régiment.

FULL ARTICLE AT WIKIPEDIA.ORG
This article is licensed under the GNU Free Documentation License.
It uses material from the Wikipedia article "Bea Arthur."
Back to Article
/