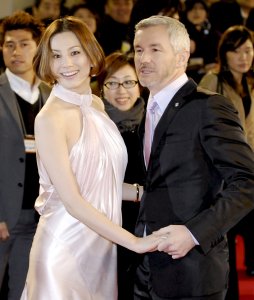 Movies // 3 months ago
'The Batman' pushed back to October 2021
"The Batman," starring Robert Pattinson as the Caped Crusader, has been delayed until Oct. 1 2021, Warner Bros. has announced.

After years of talk about bringing 'Strictly Ballroom' to the musical stage, I'm energized by the partnership we have made with Global Creatures, an Australian company that has made a giant impression on the world's stages over the last three years

Of all of my shows, 'Strictly Ballroom' is the most personal

Luhrmann was born in Sydney to a ballroom dance teacher/dress shop owner mother, and Leonard Luhrmann, a farmer. He was raised in Herons Creek, a tiny rural settlement in northern New South Wales, where his father ran a petrol station and a movie theatre, both of which would influence his son's film-making career. He attended St. Joseph's Hasting Regional School, Port Macquarie 1975-1978 and Balgowlah Boys Campus. He attended Year 11 at Narrabeen Sports High School in Sydney, performing in the school's version of Shakespeare's Henry IV, Part 1. His nickname was given to him because of a perceived resemblance to the character Basil Brush. He graduated from NIDA in 1985.

Luhrmann married Catherine Martin, the production designer on all of his films, on 26 January 1997. They have two children, Lillian Amanda Luhrmann and William Alexander Luhrmann.

FULL ARTICLE AT WIKIPEDIA.ORG
This article is licensed under the GNU Free Documentation License.
It uses material from the Wikipedia article "Baz Luhrmann."
Back to Article
/