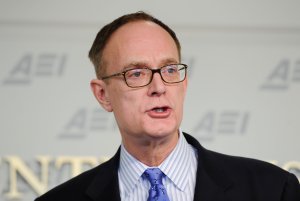 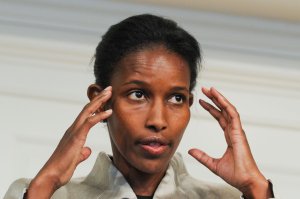 U.S. News // 6 years ago
Haverford, Smith join list of colleges with controversial commencement speakers canceling
Former Berkeley Chancellor Robert Birgenau bows out as commencement speaker at Haverford, while Christine Lagarde of IMF withdraws at Smith.
U.S. News // 6 years ago
Brandeis cancels honorary degree for Ayaan Hirsi Ali, critic of Islam
Brandeis University dropped plans to give Ayaan Hirsi Ali an honorary degree, saying some of her statements about Islam do not match school's "core values."
Outside View // 6 years ago
Outside View: NATO needs to talk Turkey
It is time to "talk turkey" about Turkey's role in NATO.
Top News // 1 decade ago
EU promises safe journey for endangered MP
The 27-nation European Union has promised a safe journey across its territory for Ayaan Hirsi Ali, an endangered former Dutch member of Parliament.
Top News // 1 decade ago
Ex-Dutch official urges EU security fund
A former Dutch lawmaker who has spoken critically of Islam is asking the European Union to fund security for her and others who receive death threats.
Special Reports // 1 decade ago
Analysis: Anti-Islam film scares The Hague
The Dutch government is bracing for widespread violence that could be sparked by an anti-Islam film that its producer wants to broadcast sometime this week.
Top News // 1 decade ago
Dutch coalition government falls
The Netherlands' coalition government has fallen over the handling of the citizenship of Somali-born Dutch politician Ayaan Hirsi Ali.
Top News // 1 decade ago
Critic of Islam to keep Dutch passport
An African-born woman who has been critical of Islam will not lose her citizenship in the Netherlands for giving a false name when she sought asylum.
Top News // 1 decade ago
Minister urged to restore citizenship
The Dutch parliament has asked the country's immigration minister to restore the citizenship of a legislator who was born in Islamic Somalia.
Top News // 1 decade ago
Hirsi Ali resigns from Dutch parliament
Dutch lawmaker Ayaan Hirsi Ali announced she is giving up her seat in parliament and leaving the Netherlands now that her citizenship has been revoked.

Ayaan Hirsi Ali ( pronunciation (help·info); Somali: Ayaan Xirsi Cali; born Ayaan Hirsi Magan 13 November 1969 in Somalia) is a Dutch feminist, writer, and politician. She is the estranged daughter of the Somali scholar, politician, and revolutionary opposition leader Hirsi Magan Isse. She is a prominent critic of Islam, and her screenplay for Theo Van Gogh's movie Submission led to death threats. Since van Gogh's assassination by a Muslim extremist in 2004, she has lived in seclusion under the protection of Dutch authorities.

When she was eight, her family left Somalia for Saudi Arabia, then Ethiopia, and eventually settled in Kenya. She sought and obtained political asylum in the Netherlands in 1992, under circumstances that later became the center of a political controversy. In 2003 she was elected a member of the House of Representatives (the lower house of the Dutch parliament), representing the People's Party for Freedom and Democracy (VVD). A political crisis surrounding the potential stripping of her Dutch citizenship led to her resignation from the parliament, and led indirectly to the fall of the second Balkenende cabinet.

She is currently a fellow at the American Enterprise Institute, a conservative think tank, working from an unknown location in the Netherlands. In 2005, she was named by Time magazine as one of the 100 most influential people in the world. She has also received several awards for her work, including Norway's Human Rights Service's Bellwether of the Year Award, the Danish Freedom Prize, the Swedish Democracy Prize, and the Moral Courage Award for commitment to conflict resolution, ethics, and world citizenship.

FULL ARTICLE AT WIKIPEDIA.ORG
This article is licensed under the GNU Free Documentation License.
It uses material from the Wikipedia article "Ayaan Hirsi Ali."
Back to Article
/