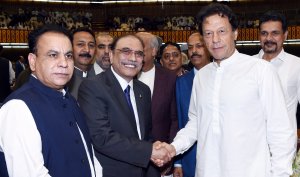 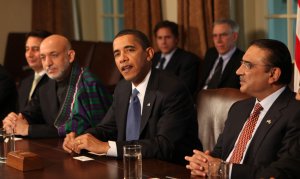 Outside View // 8 years ago
Outside View: Pakistani politics: Perils and paradoxes
Tens of millions Pakistanis will vote, marking the first time in Pakistan's history that an elected civilian government and will be replaced democratically.
Commentary: Arnaud de Borchgrave // 8 years ago
Commentary: Geopolitical conundrum
“Why the U.S.-Pakistani Alliance Isn’t Worth the Trouble,” says former Pakistani Ambassador to the United States Husain Haqqani.
Special Reports // 9 years ago
Pakistani Hindus want to remain in India
Dozens of Pakistani Hindus on pilgrimage to India said they have no intention of returning to Pakistan and may seek refugee status.
World News // 9 years ago
Zardari acts to preserve Gilani decisions
Pakistani President Asif Zardari acted Sunday to give constitutional protection to decisions made by Yousuf Raza Gilani before his ouster as prime minister.
Outside View // 9 years ago
Outside View: The Chicago NATO summit -- Much ado about?
NATO is crucial to the security and stability of its members. If not now, sometime soon, that case must be made otherwise NATO risks becoming a relic.
Special Reports // 9 years ago
Ex-ISI chief denies Pakistan coup plot
A former Pakistani intelligence chief denied that a coup was planned against the government.
U.S. News // 9 years ago
Pakistan: Memogate witness ill
A former Pakistani diplomat said illness prevents him from appearing before a special panel investigating the memo scandal that led to his resignation.
Outside View // 9 years ago
Outside View: Revolutions ahoy?
As long as government remains broken and destructive in the United States, political change is inevitable.
World News // 9 years ago
Pakistan court lifts Haqqani travel ban
A travel ban on Husain Haqqani, the former Pakistani ambassador to the United States, has been lifted by Pakistan's Supreme Court.
World News // 1 decade ago
Pakistan's political tectonic plates shift
Pakistan's political forces were at loggerheads Sunday, the day before a scheduled confidence vote in Parliament.

Asif Ali Zardari (Urdu: آصف علی زرداری; Sindhi: آصف علي زرداري; born 26 July 1955) is the 11th and current President of Pakistan and the Co-Chairman of the Pakistan Peoples Party (PPP). Zardari is the widower of Benazir Bhutto, who twice served as Prime Minister of Pakistan. When his wife was assassinated in December 2007, he became the leader of the PPP. It has been claimed that Zardari is among the five richest men in Pakistan with an estimated net worth of US$1.8 billion (2005).

Asif Ali Zardari is a Sindhi of Baloch origin from Sindh. He was born in Karachi and is the son of Hakim Ali Zardari, head of one of the Sindhi tribes, who chose urban life over rustic surroundings. His mother is from the family of Khan Bahadur Hassan Ali, who was among the founders of the first educational institution in Sindh, "Sindh Madarsa-tul-Islam Karachi".

Zardari received his primary education from Karachi Grammar School and his secondary education from Cadet College, Petaro. Zardari also attended St Patrick's High School, Karachi. While a candidate for parliament, a position for which a 2002 rule requires a college degree, Zardari claimed to have graduated from a college in London called the London School of Economics and Business (LSEB). The 2002 rule was overturned by Pakistan's Supreme Court in April 2008.

FULL ARTICLE AT WIKIPEDIA.ORG
This article is licensed under the GNU Free Documentation License.
It uses material from the Wikipedia article "Asif Zardari."