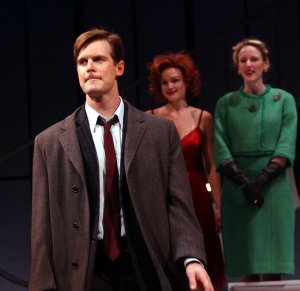 Entertainment News // 3 years ago
James Earl Jones to receive Lifetime Achievement Award at the Tonys
Beloved actor James Earl Jones is to be honored with this year's Special Tony Award for Lifetime Achievement in the Theater.
Entertainment News // 3 years ago
'Jewel in the Crown,' 'King Charles III' star Tim Pigott-Smith dead at 70
British actor Tim Pigott-Smith has died at the age of 70, his agent John Grant said Friday.

Entertainment News // 4 years ago
Mark Ruffalo replacing John Turturro in Broadway's 'The Price'
Mark Ruffalo has signed on to star in the Broadway revival of Arthur Miller's "The Price," the Roundabout Theatre Company announced.

Top News // 4 years ago
The Almanac
On Oct. 17, 1931, gangster Al Capone is convicted of income tax evasion. It took jurors four days to decide whether the mobster had cheated the Internal Revenue Service out of $215,000.

Miller was often in the public eye, particularly during the late 1940s, 1950s and early 1960s, a period during which he testified before the House Un-American Activities Committee, received the Pulitzer Prize for Drama, and was married to Marilyn Monroe.

Arthur Asher Miller was born on October 17, 1915, in Harlem, New York City, the second of three children of Isidore and Augusta Miller, Polish-Jewish immigrants. His father, a mostly illiterate but moderately wealthy businessman, owned a women's clothing store employing 400 people. The family, including his younger sister Joan, lived on East 110th Street in Manhattan and owned a summer house in Far Rockaway, Queens. They employed a chauffeur. In the Wall Street Crash of 1929, the family lost almost everything and moved to Gravesend, Brooklyn. As a teenager, Miller delivered bread every morning before school to help the family make ends meet. After graduating in 1932 from Abraham Lincoln High School, he worked at several menial jobs to pay for his college tuition.

FULL ARTICLE AT WIKIPEDIA.ORG
This article is licensed under the GNU Free Documentation License.
It uses material from the Wikipedia article "Arthur Miller."
Back to Article
/