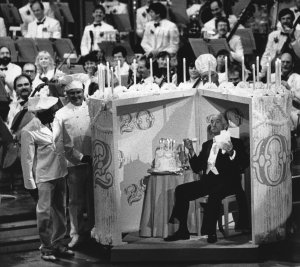 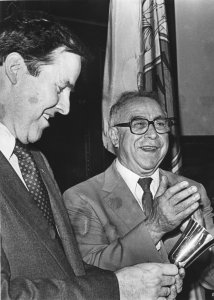 The whole point is I didn't expect to be here

People are broad-minded. They'll accept the fact that a person can be an alcoholic, a dope fiend, a wife beater and even a newspaperman but if a man doesn't drive, there's something wrong with him

People are broad-minded. They'll accept the fact that a person can be an alcoholic, a dope fiend, a wife beater and even a newspaperman but if a man doesn't drive, there's something wrong with him

Arthur Buchwald (October 20, 1925 – January 17, 2007) was an American humorist best known for his long-running column in The Washington Post, which in turn was carried as a syndicated column in many other newspapers. His column focused on political satire and commentary. He received the Pulitzer Prize for Outstanding Commentary in 1982 and in 1986 was elected to the American Academy and Institute of Arts and Letters.

Buchwald was also known for the Buchwald v. Paramount lawsuit, which he and partner Alain Bernheim filed against Paramount Pictures in 1988 in a controversy over the Eddie Murphy film Coming to America; Buchwald claimed Paramount had stolen his script treatment. He won, was awarded damages, and then accepted a settlement from Paramount. The case was the subject of a 1992 book, Fatal Subtraction: The Inside Story of Buchwald V. Paramount by Pierce O'Donnell and Dennis McDougal.

Art Buchwald was born to an Austrian-Hungarian Jewish immigrant family. He was the son of Joseph Buchwald, a curtain manufacturer, and Helen Klineberger, who later spent 35 years in a mental hospital. He was the youngest of four, with three older sisters—Alice, Edith, and Doris. Buchwald's father put him in the Hebrew Orphan Asylum in New York when the family business failed during the Great Depression. Buchwald was moved about between several foster homes, including a Queens boarding house for sick children (he had rickets) operated by Seventh-day Adventists. He stayed in the foster home until he was 5. Buchwald, his father and sisters were eventually reunited and lived in Hollis, a residential community in Queens. Buchwald did not graduate from Forest Hills High School, and ran away from home at age 17.

FULL ARTICLE AT WIKIPEDIA.ORG
This article is licensed under the GNU Free Documentation License.
It uses material from the Wikipedia article "Art Buchwald."
Back to Article
/