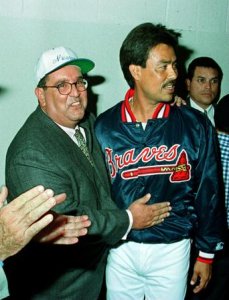 Alemán was born in Managua and received his early education at the La Salle institute in Managua. In 1967 he graduated with a law degree from the National Autonomous University of León with specializations in regional economic integration and financial law. Between 1968 and 1979, he worked as a lawyer in the commercial and banking world. He became an official in the government of Anastasio Somoza Debayle. In 1980 he was arrested by the Sandinista junta, had some of his property seized and spent 9 months in prison. The period of his arrest coincided with the death of his father. This kept him from attending his father's funeral. After he was released from prison, he spent some time in the United States.

Upon his return to Nicaragua, Alemán became heavily involved in business, political, and academic activities. He was a member of the Consejo Superior de la Empresa Privada (COSEP, 1988-1990), vice-president of the Unión de Productores Agropecuarios de Nicaragua (UPANIC, 1986-1990). He was president of the Asociación de Cafetaleros de Managua (1983-1990); the Unión de Cafetaleros de Nicaragua (UNCAFENIC, 1986-1990); the Federación de Municipios de América Central (1992-1993) and of the Federación Municipal de Ciudades de Centroamérica (1993-1995). He also imparted conferences at Tulane University and at Florida International University in the United States.

FULL ARTICLE AT WIKIPEDIA.ORG
This article is licensed under the GNU Free Documentation License.
It uses material from the Wikipedia article "Arnoldo Aleman."
Back to Article
/