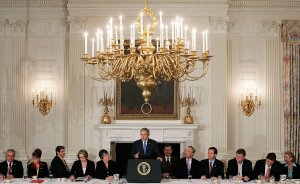 While America is stronger and more resilient as a result of these efforts to strengthen the homeland security enterprise, threats from terrorism persist and continue to evolve

Janet Napolitano (pronounced /nəpɒlɨˈtænoʊ/; born November 29, 1957) is the third and current United States Secretary of Homeland Security, serving in the administration of President Barack Obama. She is the fourth person (including an acting Secretary) to hold the position, which was created after the 9/11 terrorist attacks. A member of the Democratic Party, she was the 21st Governor of Arizona from 2003 to 2009. She was Arizona's third female governor, and the first woman to win re-election. Prior to her election as governor, she served as Attorney General of Arizona from 1999 to 2002. She is the first woman and the 23rd person to serve in that office. Napolitano is the 1977 Truman Scholar from New Mexico. Forbes ranked her as the 51st most powerful woman in 2009.

Napolitano was born on November 29, 1957, in New York City, the daughter of Jane Marie (née Winer) and Leonard Michael Napolitano, who was the dean of the University of New Mexico School of Medicine. She is of half Italian ancestry and is a Methodist. She was the eldest of three children; she has a younger brother and sister. She was raised in Pittsburgh, Pennsylvania, and Albuquerque, New Mexico, where she graduated from Sandia High School in Albuquerque in 1975 and was voted Most Likely to Succeed. She graduated from Santa Clara University in Santa Clara, California, where she won a Truman Scholarship, and was valedictorian. In 1978, she studied for a term at the London School of Economics as part of the Santa Clara's exchange programme through IES Abroad. She then received her Juris Doctor (J.D.) from the University of Virginia School of Law. After law school she served as a law clerk for Judge Mary M. Schroeder of the United States Court of Appeals for the Ninth Circuit, and then joined Schroeder's former firm, the Phoenix law firm Lewis and Roca.

In 1991, while a partner with the private Phoenix law firm Lewis and Roca LLP, Napolitano served as an attorney for Anita Hill. Anita Hill testified in the U.S. Senate that then U.S. Supreme Court nominee Clarence Thomas had sexually harassed her ten years earlier when she was his subordinate at the federal EEOC.

FULL ARTICLE AT WIKIPEDIA.ORG
This article is licensed under the GNU Free Documentation License.
It uses material from the Wikipedia article "Arizona Gov. Janet Napolitano."
Back to Article
/