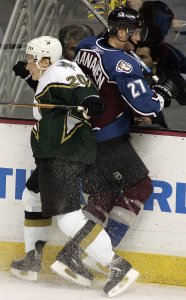 Antti Miettinen (born July 3, 1980) is a Finnish professional ice hockey forward who plays for the Minnesota Wild of the National Hockey League.

Miettinen was drafted by the Dallas Stars as their seventh-round pick, 224th overall, in the 2000 NHL Entry Draft. Prior to playing in the NHL, Miettinen played for five years in the SM-Liiga with HPK Hämeenlinna picking up the Kultainen kypärä and the Lasse Oksanen trophy in his final year in Finland.

Miettinen spent two-years in the AHL before playing his first full season in the NHL in the 2005–06 season with the Stars.

FULL ARTICLE AT WIKIPEDIA.ORG
This article is licensed under the GNU Free Documentation License.
It uses material from the Wikipedia article "Antti Miettinen."
Back to Article
/