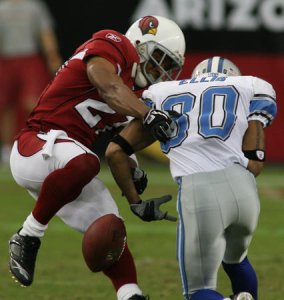 Sports News // 5 years ago
Vikings see young Adrian Peterson in Rams' Todd Gurley
EDEN PRAIRIE, Minn. -- The Minnesota Vikings haven't allowed a team to rush for 100 yards since coming out of their bye.

Sports News // 5 years ago
Matt Forte injury may slow Bears' progress
LAKE FOREST, Ill. -- Injuries have slowed progress in a rebuilding season for the Chicago Bears to a complete crawl, and until now the one constant had been running back Matt Forte.

Antrel Rocelious Rolle (born December 16, 1982 in Homestead, Florida) is an American football free safety, drafted eighth overall in the 2005 NFL Draft by the Arizona Cardinals out of the University of Miami.

Antrel Rolle attended South Dade High School in Homestead, Florida. As a senior, on defense, he posted three interceptions and 86 tackles. On offense, he had four receptions for 160 yards (40.0 yards per rec. avg.) and a touchdown. As a junior, on defense, he posted three interceptions, 85 tackles, and five pass deflections, and he returned three kickoffs and three punts for touchdowns.

Rolle was an All-American CB at Miami where he especially excelled in press-coverage. Notable performances included shutting down future All-American receivers Larry Fitzgerald (3 catches for 26 yards) and Calvin Johnson (2 catches for 10 yards).

FULL ARTICLE AT WIKIPEDIA.ORG
This article is licensed under the GNU Free Documentation License.
It uses material from the Wikipedia article "Antrel Rolle."
Back to Article
/