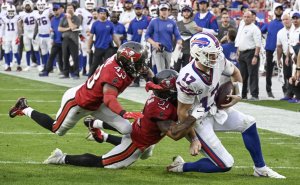 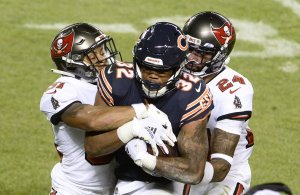 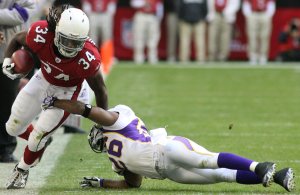 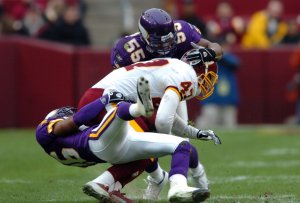 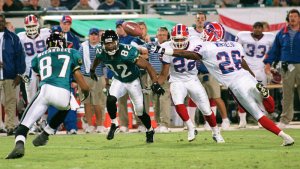 NFL // 11 months ago
Brady leads Buccaneers over Chiefs for his seventh Super Bowl win
Tom Brady led the Tampa Bay Buccaneers to a 31-9 rout of the Kansas City Chiefs on Sunday in Super Bowl LV to win his seventh championship ring.

NFL // 1 year ago
Buccaneers top Saints for first NFC title game berth since 2002 season
The Tampa Bay Buccaneers used a second-half surge to beat the New Orleans Saints 30-20 in the divisional round of the NFL playoffs Sunday night at the Mercedes-Benz Superdome.

NFL // 1 year ago
Bengals get Tee Higgins, Eagles pick Jalen Hurts on Day 2 of 2020 NFL Draft
One day removed from adding Joe Burrow, the Cincinnati Bengals selected ex-Clemson receiver Tee Higgins with the first pick in the second round of the virtual 2020 NFL Draft on Friday.

He's a vet, a good player, he's been at that level for a while now

Antoine Winfield (born June 24, 1977 in Akron, Ohio) is an American football cornerback in the NFL. He played college football at Ohio State University, winning the Jim Thorpe Award as the nation's top defensive back in 1998. Winfield was selected by the Buffalo Bills in the first round of the 1999 NFL Draft. Since 2004, he has played for the Minnesota Vikings. He has 14 interceptions while with the Vikings, along with three touchdowns. One of his most memorable plays of his career was when he returned a blocked field goal for 59 yard touchdown against New Orleans Saints on Monday Night Football.

Winfield attended Garfield High School in his hometown of Akron, Ohio. He is regarded as one of the most physical corners in the league, known for his bone-jarring hits, and was ranked by Peter King of Sports Illustrated as the 31st best player in the NFL. He made his first Pro Bowl in 2008.

During Winfield's years with the Bills he did not make a Pro Bowl, despite outstanding play.

FULL ARTICLE AT WIKIPEDIA.ORG
This article is licensed under the GNU Free Documentation License.
It uses material from the Wikipedia article "Antoine Winfield."