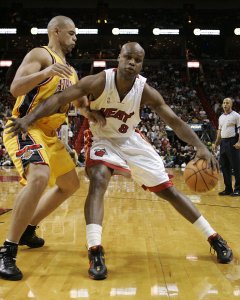 NBA // 3 years ago
Milwaukee Bucks knock off Boston Celtics
BOSTON -- Back on Feb. 8, Jabari Parker of the Milwaukee Bucks suffered a torn ACL and was lost for the season, taking his 20.1 points and 6.2 rebounds per game averages with him to his offseason.

Coming out of (halftime), Walter did a tremendous job on (Jermaine) O'Neal and then Paul came back and got the rebounds, and that is what we ned as the series goes along

We are trying to be the aggressor in this series

Antoine Devon Walker (born August 12, 1976, in Chicago, Illinois) is an American professional basketball player. He is currently a free agent.

Walker attended Mount Carmel High School, where he played with Philadelphia Eagles starting Quarterback Donovan McNabb and attained all-state status as a senior, earning a full scholarship to play for Rick Pitino at the University of Kentucky. He was a starting forward on the Wildcats' 1996 NCAA Men's Division I Basketball Championship-winning team. As a freshman at Kentucky he was named SEC Tournament MVP. In his sophomore year Antoine was named All-SEC First, All-SEC Tournament and to the All-NCAA Regional Teams.

After his sophomore season he declared for the 1996 NBA Draft and was picked sixth overall by the Boston Celtics. In the 1996-1997 season, Walker made the All-Rookie 1st Team and led the team in scoring (17.5 ppg) and rebounds (9.0). However, the team had its worst season in franchise history, 15-67. The following season, Walker made the All-Star team as a reserve while averaging 22.4 ppg and 10.2 rpg. He also scored a career-high 49 points in a loss against the Washington Wizards. The Celtics posted another bad record: 36-46. In the '98 draft, the Celtics had the 10th pick and chose swing man Paul Pierce. The next few years, Pierce and Walker were the 1-2 punch for the Celtics. In the 2001-2002 season, Walker had his best overall season by helping lead the Celtics to a 49-33 record and their first playoff berth in 7 years. He was second in his team in scoring (22.0 ppg), first in rebounds (9 rpg), and 1st in assists, (5.0 apg). Pierce and Walker took the team all the way to the Eastern Conference Finals where they fell to the New Jersey Nets in 6 games. The next season, Walker made his 3rd All-Star team but had a sub par season. Even though he averaged 20 a game, he struggled with his shot, shooting 38.8% from the field which is extremely low for a power forward. The Celtics had a mediocre season and were swept in the Eastern Conference Semi-Finals by New Jersey.

FULL ARTICLE AT WIKIPEDIA.ORG
This article is licensed under the GNU Free Documentation License.
It uses material from the Wikipedia article "Antoine Walker."
Back to Article
/