TV // 2 months ago
'ER' cast to reunite April 22 on 'Stars in the House'
George Clooney, Noah Wyle, Julianna Margulies, Anthony Edwards and other "ER" alums will reunite on the YouTube series "Stars in the House."

NBA // 7 months ago
NBA Draft: Knicks trade with Jazz, land 23rd pick
The New York Knicks on Wednesday jumped up from the No. 27 overall pick to the No. 23 overall pick for their second selection in the 2020 NBA Draft after a draft-day trade with the Utah Jazz, the teams announced. 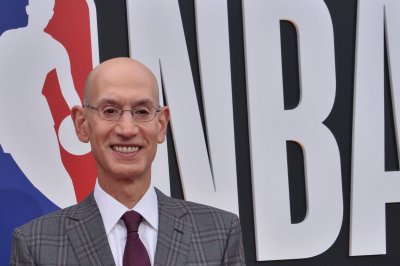 NBA // 7 months ago
ESPN to host virtual 2020 NBA Draft on Nov. 18
The 2020 NBA Draft will be held virtually on Nov. 18 from ESPN's studios in Bristol, Conn., the league and network announced Thursday.

Anthony Charles Edwards (born July 19, 1962) is an American actor and director. He has appeared in various movies and television shows, including Fast Times at Ridgemont High, Top Gun, Zodiac, Revenge of the Nerds, Northern Exposure and ER.

Edwards was born in Santa Barbara, California, the son of Erika Planck (née Weber), an artist/landscape painter, and Peter Edwards, an architect. He has two older sisters, Heidi and Ann-Marie, and two older brothers, Peter and Jeffrey. Edwards was encouraged by his parents to attend college before pursuing his interest in acting. He received a scholarship to the Royal Academy of Dramatic Arts in England and studied theatre at University of Southern California but by the age of nineteen was being offered enough acting work to enable him to leave college.

Edwards' early work includes a co-starring role in the TV series It Takes Two with Richard Crenna and Patty Duke Astin as his parents and Helen Hunt as his sister. His first starring role was in the 1984 comedy Revenge of the Nerds as Gilbert Lowe, though he had a tiny part in the 1982 film Fast Times at Ridgemont High, credited as "stoner Bud". It was his role as LTJG Nick "Goose" Bradshaw alongside Tom Cruise in the 1986 film Top Gun that brought his first widespread public acknowledgement. His character, who died in an aviation accident, was among the most prominent and popular in the film. He also appeared as a terminally ill patient in Hawks (1988) alongside Timothy Dalton, another role which brought him worldwide fame. He also starred in the 1990 movie Downtown with Penelope Ann Miller and Forest Whitaker. In 1992 and 1993 he played Mike Monroe in ten episodes of Northern Exposure.

FULL ARTICLE AT WIKIPEDIA.ORG
This article is licensed under the GNU Free Documentation License.
It uses material from the Wikipedia article "Anthony Edwards."
Back to Article
/