Entertainment News // 2 years ago
Natalie Dormer: I have 'never' felt comfortable with nude scenes
"Game of Thrones" and "The Tudors" alum Natalie Dormer discussed her reservations about sex scenes in a new interview. 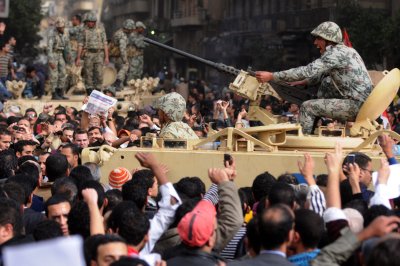 Top News // 5 years ago
The Almanac
On Jan. 25, 2011, Egyptian citizens, expressing dissatisfaction with the government, clashed with riot police in cities throughout the country.

World News // 5 years ago
Anne Boleyn portraits may not be of her, scientists say
A famous portrait of King Henry VIII's wife Anne Boleyn that hangs at the National Portrait Gallery may not be of the former queen, a study has determined.

Anne Boleyn ( /ˈbʊlɪn/, /bəˈlɪn/ or /bʊˈlɪn/); c.1501/1507 – 19 May 1536) was Queen of England from 1533 to 1536 as the second wife of Henry VIII of England and the 1st Marquess of Pembroke in her own right for herself and her descendants. Henry's marriage to Anne, and her subsequent execution, made her a key figure in the political and religious upheaval that was the start of the English Reformation. A commoner, Anne was the daughter of Thomas Boleyn, 1st Earl of Wiltshire and his wife, Elizabeth Boleyn, Countess of Wiltshire, and was educated in the Netherlands and France, largely as a maid of honour to Claude of France. She returned to England in early 1522, in order to marry her Irish cousin James Butler, 9th Earl of Ormond; however, the marriage plans ended in failure and she secured a post at court as maid of honour to Henry VIII's queen consort, Catherine of Aragon.

In 1525, Henry VIII became enamoured of Anne and began pursuing her. She resisted his attempts to seduce her, refusing to become his mistress as her sister Mary had. It soon became the one absorbing object of Henry's desires to annul his marriage to Queen Catherine so he would be free to marry Anne. When it became clear that Pope Clement VII would not annul the marriage, the breaking of the power of the Catholic Church in England began.

Henry's chief minister, Thomas Wolsey, Archbishop of York, was dismissed to his diocese, allegedly at Anne Boleyn's instigation. (George Cavendish, Wolsey's chamberlain, records that the servants who waited on the king and Anne at dinner in 1529 in Grafton heard her say that the dishonour that Wolsey had brought upon the realm would have cost any other Englishman his head. Henry replied, "Why then I perceive...you are not the Cardinal's friend.")

FULL ARTICLE AT WIKIPEDIA.ORG
This article is licensed under the GNU Free Documentation License.
It uses material from the Wikipedia article "Anne Boleyn."
Back to Article
/