Entertainment News // 1 year ago
Enrique Iglesias makes his twins laugh in new video
Enrique Iglesias shared a cute clip of himself entertaining Lucy and Nicholas, his 8-month-old twins with Anna Kournikova, on Instagram.

Entertainment News // 1 year ago
Anna Kournikova watches World Cup game with her twins
Anna Kournikova posted cute photos of Nicholas and Lucy, her son and daughter with Enrique Iglesias, ahead of the Russia vs. Spain match.

Entertainment News // 2 years ago
Enrique Iglesias shares photo with his twins on 'game day'
Enrique Iglesias posted a first picture with Nicholas and Lucy, his son and daughter with Anna Kournikova, on Instagram. 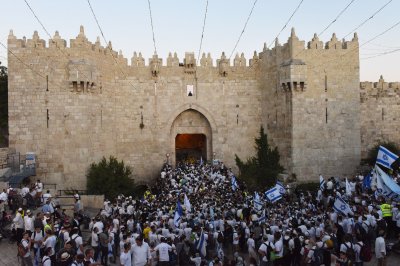 Top News // 2 years ago
The Almanac
On June 7, 1967, Israeli troops captured Jerusalem during the Six-Day War.

Sports News // 3 years ago
Simone Biles, Aly Raisman flaunt sculpted silhouettes in tiny bikinis
If you couldn't tell when they were wearing leotards, the secret is definitely out now.

She is taking the position this is her house. Mom and Dad were her managers and promoters. This was a house they all shared

I'm so excited to be a part of 'The Biggest Loser' team; I've always been a fan of the show

Of course I'm disappointed to lose it, but the tension is out

Anna Sergeyevna Kournikova (Russian: Анна Сергеевна Ку́рникова; born 7 June 1981) is a Russian professional tennis player who now is a Russian-American citizen. Her beauty and celebrity status made her one of the best known tennis players worldwide. At the peak of her fame, fans looking for images of Kournikova made her name one of the most common search strings on the Internet search engine Google.

Although reaching No. 8 in the world in 2000, she never won a WTA Title in singles. Kournikova's forte has been doubles, where she has at times been the World No. 1 player. With Martina Hingis as her partner, she won Grand Slam titles in Australia in 1999 and 2002. Based on their looks, Hingis and Kournikova referred to themselves as the "Spice Girls of Tennis". Kournikova's professional tennis career has been curtailed for the past several years, and possibly ended, by serious back and spinal problems. She resides in Miami Beach, Florida, and plays in occasional exhibitions and in doubles for the St. Louis Aces of World Team Tennis. She currently is the new trainer, replacing Jillian Michaels, on the television show The Biggest Loser.

Anna Kournikova was born in Moscow, Soviet Union, on June 7, 1981. Her father, Sergei Kournikov, was 20 at the time. Sergei, a former Greco-Roman wrestling champion, had earned a Ph.D. and was a professor at the University of Physical Culture and Sport in Moscow. As of 2001, he was still a part-time martial arts instructor there. Her mother Alla, who was 18 when Kournikova was born, had been a 400-meter runner.

FULL ARTICLE AT WIKIPEDIA.ORG
This article is licensed under the GNU Free Documentation License.
It uses material from the Wikipedia article "Anna Kournikova."
Back to Article
/