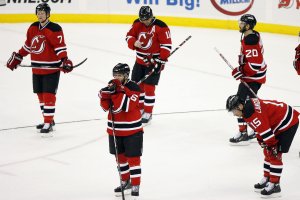 NHL // 3 years ago
Pittsburgh Penguins sweep New Jersey Devils, clinch second in Metro Division
NEWARK, N.J. -- In a game that featured 11 goal-scorers and 25 players who recorded at least one point, the Pittsburgh Penguins defeated the New Jersey Devils 7-4 on Thursday night at the Prudential Center to clinch second place in the Metropolitan Division. 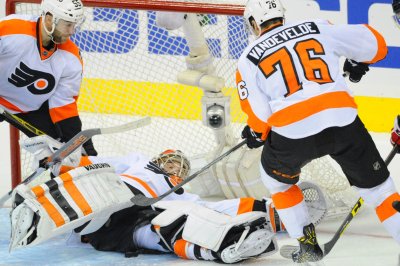 NHL // 3 years ago
Columbus Blue Jackets grind out 3-0 win in New Jersey
NEWARK, N.J. -- Not every victory in the National Hockey League is a thing of a beauty.

Andy Greene (born October 30, 1982) is an American ice hockey player who plays for the New Jersey Devils of the National Hockey League.

Before joining the Devils, he attended and played hockey for Miami University. He was signed out of Miami University, and was assigned to the Devil's AHL affiliate, the Lowell Devils, after training camp. He succeeded at the AHL level, making the PlanetUSA all-star team. He was called up for a short stint to replace the injured Johnny Oduya. Though Greene played well and showed considerable promise, he was reassigned to Lowell upon Oduya's return. Later in the season, he was again recalled when Colin White was injured. When the 2007 playoffs began, the NHL salary cap no longer applied, allowing the Devils to add Greene to their permanent roster. With the return of injured defenseman Richard Matvichuk, it appeared as though Greene would sit. However, an injury to Colin White allowed Greene to remain on the roster. During this period, Greene played so well that, upon White's return, Oduya was scratched in Greene's stead.

FULL ARTICLE AT WIKIPEDIA.ORG
This article is licensed under the GNU Free Documentation License.
It uses material from the Wikipedia article "Andy Greene."
Back to Article
/