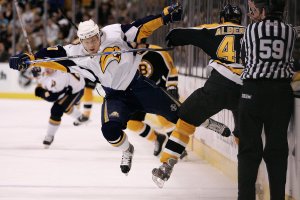 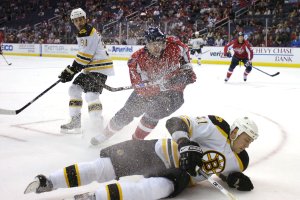 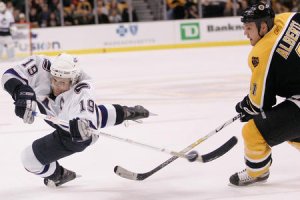 Andrew James Alberts (born June 30, 1981) is an American professional ice hockey defenseman who plays for the Vancouver Canucks of the National Hockey League (NHL). He has additionally played in the NHL with the Boston Bruins, Philadelphia Flyers and Carolina Hurricanes. A stay-at-home defenseman, he is known for playing a physical style of game.

After a two-year junior career in the United States Hockey League (USHL), he was selected by the Bruins 179th overall in the 2001 NHL Entry Draft. Following the draft, he joined the college ranks with the Boston College Eagles of the Hockey East conference. In four seasons with the Eagles, Alberts was named Hockey East's Best Defensive Defenseman and was a two-time NCAA All-American. Joining the Bruins in 2005, he played three seasons with the club before being traded to the Flyers. He played with the Flyers for one year, then with the Hurricanes in 2009. At the trade deadline the following year, he was dealt to the Canucks. Internationally, Alberts has competed for the American national team at the 2006 and 2007 World Championships.

Alberts played high school hockey for Benilde-St. Margaret's from 1997 to 1999. In his graduating year, he earned All-Conference honors while leading the Red Knights to a State Class A title. He played the next two seasons at the junior level in the United States Hockey League (USHL) with the Waterloo Blackhawks. Recording 4 points over 49 games in his rookie campaign, he was named the team's Most Improved Player. In 2000–01, he served as an alternate captain while raising his points total to 14 over 54 games. That summer, Alberts was drafted by the Boston Bruins in the sixth round (179th overall) of the 2001 NHL Entry Draft.

FULL ARTICLE AT WIKIPEDIA.ORG
This article is licensed under the GNU Free Documentation License.
It uses material from the Wikipedia article "Andrew Alberts."
Back to Article
/