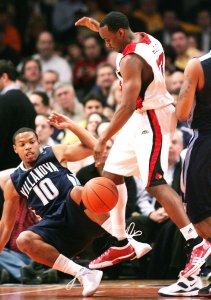 College Basketball // 5 years ago
Louisville Cardinals: Rick Pitino faces suspension, fine for prostitute scandal
Louisville coach Rick Pitino is charged by the NCAA with "failure to monitor" his basketball program in connection with lurid allegations of university officials providing cash and prostitutes who performed striptease and sex acts for at least 17 basketball recruits in the university's student dormitory.

Sports News // 5 years ago
Louisville students' lawsuit against escort Katina Powell dismissed
A judge has dismissed the lawsuit filed by University of Louisville students against a former escort, who wrote a book about allegations of sex parties at the basketball players' dormitory.

Sports News // 5 years ago
Bucky Dent: Louisville ban could also mark end of Rick Pitino's tenure
The country could have fallen for Damion Lee's ability to take over a game.

Sports News // 6 years ago
Louisville's Rick Pitino: 'Won't resign'
Rick Pitino issued a statement Thursday apologizing to Louisville fans for the negativity around the program since allegations of sex and stripping for recruits were raised by a self-described escort.

Sports News // 6 years ago
PRESS BOX: Allegations continue at Louisville
Former escort Katina Powell said former Louisville graduate assistant coach Andre McGee paid her $10,000 to bring dancers to campus to strip and even have sex with some recruits or their guardians.

He averaged 22.3 points, 4.2 assists and 3.7 steals per game as a senior at Canyon Springs High School in Moreno Valley, California.

McGee was the starting point guard for the 2008-09 Louisville Cardinals men's basketball team. He says he chose Louisville because "Louisville is the best college sports town in the country, hands down, and Coach Pitino is the best coach in college. I would have been dumb to go anywhere else."

FULL ARTICLE AT WIKIPEDIA.ORG
This article is licensed under the GNU Free Documentation License.
It uses material from the Wikipedia article "Andre McGee."