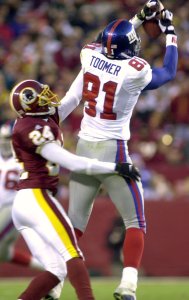 Amani Toomer (pronounced /ah-MAHN-ee/) (born September 8, 1974 in Berkeley, California) is an American football wide receiver who is currently a free agent. He was drafted by the New York Giants in the second round of the 1996 NFL Draft. He played college football at Michigan.

Toomer was an All-American at De La Salle High School in Concord, California. Toomer transferred to De La Salle after completing his freshman year at Albany Highschool in Albany, California. Several publications, including USA Today, Parade, and The Sporting News ranked him as one of the top high school wide receivers in the nation.

Toomer attended the University of Michigan. As a junior in 1994, he became only the third player in school history, after Jack Clancy and Desmond Howard, to post 1,000 receiving yards in a season, finishing with 54 receptions for 1,096 yards and six touchdowns; he was named to the All-Big Ten Conference First Team. His senior year in 1995, Toomer caught 44 passes for 758 yards and seven scores and was voted to the All-Big Ten Second Team.

FULL ARTICLE AT WIKIPEDIA.ORG
This article is licensed under the GNU Free Documentation License.
It uses material from the Wikipedia article "Amani Toomer."
Back to Article
/